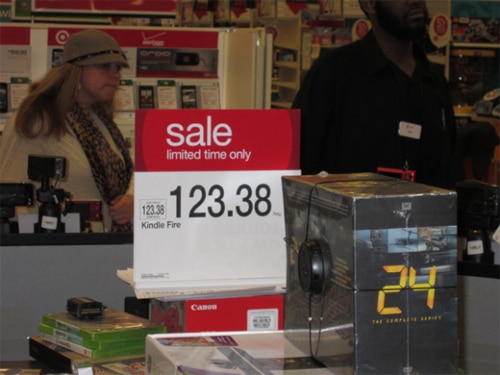 As if the Kindle Fire’s $199 price tag wasn’t lucrative enough, Target and Wal-Mart stores have listed it at an even cheaper $123.38. That’s 35 percent less than the Amazon tablet’s regular price though the reduced price is for a temporary period and that too, is offered by only select stores. Like the Target store at Trumbull, Connecticut has been selling the Kindle Fire at the reduced price while images of some Walmart stores also doing the same has also made it online.

Though never acknowledged, each Kindle Fire is believed to cost $202 to manufacture, and hence even Amazon is undercutting its own product when selling the same at $199. The possible reason for such a loss making strategy could be that Amazon is more eager to make some headway into the iPad and the Nook’s market hold rather than making profits right away. Instead, what Amazon is looking forward to is balance the cost by selling content to the Kindle Fire users. Not a bad idea if you are against established players of the likes of the iPad. Also in any case, the ploy seems to be working, at least partially going by the tremendous response the Amazon tablet has had so far.