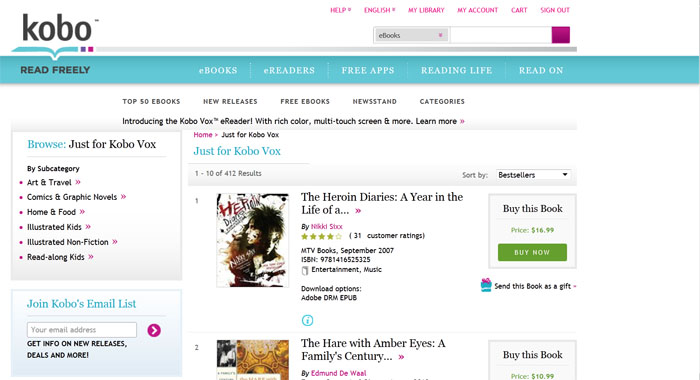 Kobo has introduced a new section to its store that has Vox exclusive ebooks. These books comprise of graphic novels, cookbooks, kids books, and enhanced variants.

The Kobo e-reader came out a few weeks ago and we were the first news source to give you a full review days before the device was released. The main allure is that it is full color and gives you the advantage of reading magazines and content that shines in its vibrancy.

Enhanced ebooks give you the ability to view video, audio, and interactive content contained within the books. These are fairly popular on platforms like iOS, where tons of books have their own dedicated application to give you the most out of the experience. There are only 35 books of this type currently stocked in the store, but we heard word there is more to come soon.

Many publishers have been signed on to contribute books both now and in the future. Companies such as Crown, MTV Books, HarperCollins, Wiley, and Simon & Schuster are in the game right now.

As a company, Kobo has not really done full color books and media before and is going through some growing pains. The company has 2.3 million ebooks in its store and that has been its bread and butter. It is in a position where their color offerings are lackluster and don’t really give you much of a selection. The company seems to rely on Zinio and other 3rd party companies to deliver magazines to you instead of signing on publishers themselves and marketing them directly.

If you look at Barnes and Noble, they have been going strong on interactive content and full color books since the advent of the Nook Color. They have a very developed ecosystem and have attracted many small companies to exclusively develop for their platform. The success of an ecosystem is dependant on the small companies like iStorytime and others who make great content for a specific platform. Both Kobo and Amazon have their work cut out for them offering books designed for a full color device when all they have done before is traditional ebooks.