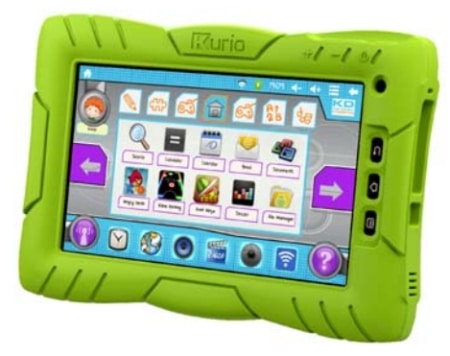 Tablet devices designed exclusively for kids is a rareity and only Fisherprice, V.Tech and Leapfrog have managed to pull off any sales that matter. A new device by the name of  Kurio, the tablet from Techno Source is going to makes it’s debut in September and would be available in multiple 7, 8 and 10 inches models. No other tablet for kids presents so many size options while prices range between $199 to $239.

Specification wise (at least for the 7 inch version), the tablet sports a 1 GHz single core ARM Cortex A8 processor which will draw upon 512 MB of RAM while storage stands at 4 GB. The tablet will run Android 2.3 Gingerbread though with the tablet been designed for Kids, the OS has been extensively customized to allow for a colorful screen with large sized fonts and icons. Other specifications of the tablet include microSD card slot, Wi-Fi, HDMI out port, front facing camera, along with a full-sized USB port.

Also, with the Kurio being made solely for kids, features like all round padding to allow for extra durability is the last thing that its makers could miss out on. So are other aspects such as the feature that allows for blocking certain sites that the parents may so wish for. In fact, web connectivity itself can be blocked if deemed necessary. However, a nice aspect of the Kurio is that it will allow for maintaining several profiles which means more than one user — up to 8 — can use the device under the themes and setting specifically applicable to them. Another unique quality of the Kurio tablet is that the device can also be used by teens with the rubber cladding peeled off and put back again when it is to be shared by kids.

A nice aspect and great selling point of the Kurio is that the tablet will have access to the official Android Market, which means there will be a fair amount of content such as games or educational apps to be made available.