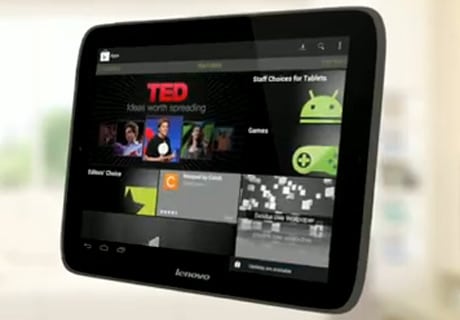 The Lenovo IdeaTab S2109 is an Android tablet with decent specs. Lenovo has priced it at $389, and the tablet has already received the necessary FCC notifications to go on sale in the US.

So those who want the Lenovo IdeaTab S2109 can head over to the Lenovo site where orders are being accepted and shipping is expected to start anytime. Specifications aren’t anything special, with the 9.7 inch screen brought to life by 1024 x 768 pixels. The OS is Android 4.0 and the processor is a 1 GHz TI OMAP 4 dual core chip. The latter already does duty on the Amazon Kindle Fire and Barnes & Noble NOOK Tablet, responsive if not a speed monster. On board storage amounts to 8 GB with 32 GB more to be availed of via microSD card. Other specs include a 1 GB RAM, HDMI port, a micro USB port, along with four external SRS surround sound speakers.

A unique aspect of the S2109 is its 4:3 aspect ratio, which not many of today’s Android tablets have. This makes the tablet best suited for reading ebooks and surfing the net. However, the flip side of this is that as most Android applications are based on the widescreen format, so they may not look their best on the S2109. Watching movies on the tablet might not be as appealing owing to the aspect ratio, as well.

The tablet looks cool and well built with a price that is fitting of its specs. Those eager for the S2109 can place their orders here.