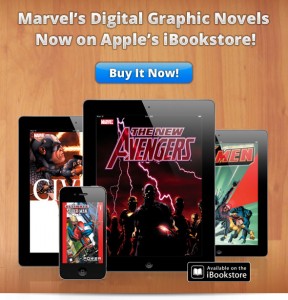 Marvel has officially started to launch a series of graphic novels to the iOS platform. These are normally a series of comic books compiled in one format to save you money and span the epic scale of a particular saga. The company is launching its new initiative with over 60 different editions and intends on launching new ones every week. Normally, Marvel titles are contained within their official app, but now they are launching them in the Apple iBookstore.

Marvel is on Apple’s iOS platform and has been launching single issue comics for the last few years. In the last few months, they started a new program to launch the digital editions on the same day as the printed one, which has improved sales for the company. They also sell graphic novels within their app to make it easier for people to follow a particular series in its entirety. Instead of purchasing seven different single issues, you can pay $12.99 or more for the whole series. The graphic novels tend to also include new art work and interviews with the writers. Normally, graphic novels are printed a few months after the single issue series wraps up.

The company has over 60 contained within their Marvel app right now, including Civil War, Dark Avengers, Siege, and many more! I think it’s a savvy move for the company to branch out into the iBookstore selling its graphic novels. This way you can hopefully rope in the casual audience that may just be browsing through it, the same way Marvel comics are sold in many book stores in Canada and the USA.