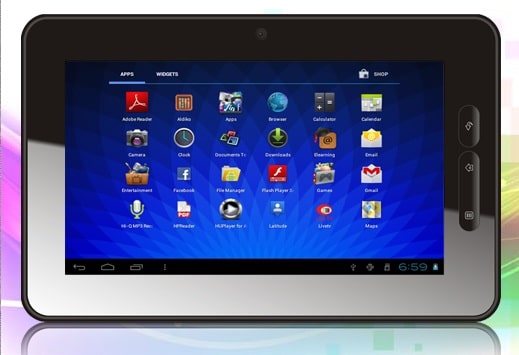 It’s raining tablets in India. No sooner had the country witnessed the launch of Android ICS tablets from HCL, handset maker Micromax is out to pamper the Indian tablet buying crowd with its Funbook tablet device.

The tablet’s specification presents a few contradictions. While the Funbook comes with a powerful 1.2 GHz Cortex A8 processor that operates in conjugation with a Dual Mail 400 – 2D/3D graphics processor for better multimedia processing ability, its 7 inch display with a resolution of just 800 x 480 pixels is a bit of a letdown. The Funbook features a 512 MB RAM along with 4 GB of onboard storage space, though the latter is expandable to 32 GB by way of external micro SD card. Running the entire show will be the latest Android ICS.

Further, the Funbook is both Wi-Fi and 3G capable, and features a USB port and a HDMI out port as well. Also, a good thing with the Funbook is that it is compatible with the Tata Photon EVDO data card that comes bundled with the device. On offer will be 1 GB of free data usage over a period of 2 months. Powering the Funbook will be a 2800 mAh battery that its makers claim will be good enough for about 5 hours of run time.

Micromax is targeting the student community with the Funbook and has priced the tablet attractively at just INR 6,499 for this. Towards this, Micromax has also preloaded the tablet with many convenient e-learning apps. Publishers like Pearson and Scholarclub add to this application reservoir of the tablet. Among the apps that come pre-loaded include Documents on the Go, Adobe PDF, Adobe Flash, YouTube, Text Editor, and so on. As for the Micromax e-learning app, it will have on offer study materials for students right from class 1 to degree courses. Preparatory materials for medical, engineering, and MBA students will also be available via the e-learning app.