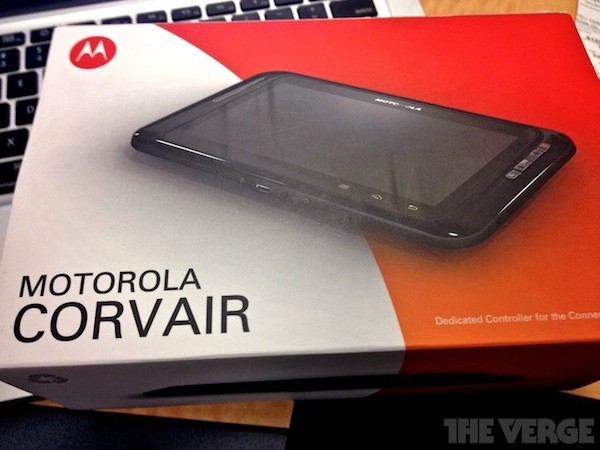 Here is a tablet PC from Motorola that promises to make your TV viewing experience that much more enjoyable by ensuring you now have an advanced remote control to let you make the best of your TV. Named Corvair, the tablet also happens to be the smallest to come from Motorola, with just 6 inches of display. Also, it’s still a work in progress, as Motorola has yet to officially announce the Corvair, which right now is being put through its paces with cable companies.

However, there aren’t many specifications available of the tablet as yet, though there are some bits and pieces that has come to the fore. The tablet will come with a 4000 mAh battery, which is more than enough for a tablet featuring 6 inch display. But then, more is always better in the power department. The Corvair will be seen spending more time on the coffee table than plugged on to a wall socket. Surely that’s one big advantage that everyone expects out of a remote control device.

Also, another unique aspect of the Corvair tablet is that it has been designed to communicate with a TV or a set-top box via the conventional IR technology as well as the ZigBee-based, no-line-of-sight RF4CE technology. It’s being presumed the tablet will also have the capability to stream internet content on to the TV via Wi-Fi, though this is mere speculation as of now.

Other aspects of the Crovair that we are curious to know of is the price and availability of the tablet, though with the retail box already final, all of these shouldn’t be too far off. Also, with Android 2.3 as the operating system with a layer of customization on top, it remains to be seen if the Crovair will only be limited to the living room as its makers intend, or it could also allow users to catch up with some reading as well. Surely, there is no dearth of e-book reading apps currently available and it will be interesting to see if the Crovair can play host to any of these.