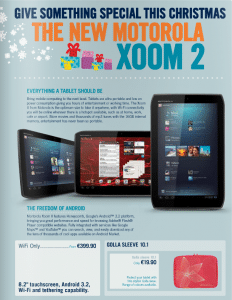 The second generation XOOM tablet from Motorola appears to be hitting the market in UK before Christmas holidays begin. Price of the device is estimated to be €400, as is evident from an image of the tablet has been made available via a print ad for Carphone Warehouse.

Details that one can gather from the ad are that the tablet would have an 8.2 inch display with Android 3.2 Honeycomb as the operating system. Further, the tablet would have 16 GB of on-board storage while the leaked image also points out what is being said here refers to the Wi-Fi only model.

However, while detailed specification has been skipped in the ad, previous leaks has led us to believe the tablet will have a 1.2 GHz dual core processor along with an integrated 1080p HD video capable camera as well. The XOOM 2 was also touted to be able to function as an IR remote control device as well.

However, while we await for the full and final specification to emerge, the one thing that might not go down too well with prospective buyers is the price which does seems to be a bit on the higher side for a tablet offering 8.2 inches of screen real estate. More so since there are cheaper options available in the 7 inch segment. A high price tag for the first gen XOOM led to its downfall so that it recorded shipment figures of just 100,000 units in the last quarter. However, what has also to be said is that the XOOM shipment numbers might be less but is yet comparable with other tablet devices that are in the market leaving aside Apple iPad which has a nook and niche of its own. The last thing we’d like to see is a tablet failing owing to its high price and not anything else. The original XOOM sported decent specs lost out on the price front.