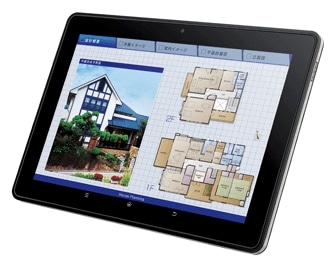 Sharp’s earlier attempt at a tablet device did not really take off in a manner that could match its global stature as an electronics maker of repute. The Japanese major had even tried a different approach to the tablet market, by positioning its Galapagos line of tablets as e-book reading devices. Nevertheless, Sharp is back with a new tablet offering though the RW-T110, that marks its second coming to the tablet segment does not look to be successful enough to be able to turn the tides in Sharp’s favor. This since the tablet’s specifications make the tablet look more than a year old, especially after the iPad 3 came out.

However, while the above mentioned specs are plain, something that we have had enough of during the past year or so, the one unique feature that the Sharp tablet boasts of is NFC or Near Field Communications. This gives the tablet ability to connect to networks over short range and complete bill payments and such. That said, the last bit might be too little to help prevent the Sharp tablet from being steam rolled in the markets by more capable devices from Samsung or Acer, let alone the Apple iPad 3. In fact, with the kind of specs the Sharp RW-T110 tablet comes with, it makes on feel if Sharp is at all serious with its attempt at the tablet segment.

Sharp is marketing the tablet as an Enterprise product with sales starting on the 27th of March in Japan. However, the tablet will be confined to Japanese shores as of now and it’s not likely to ever make it to foreign shores anytime soon, at least not in the current configuration.