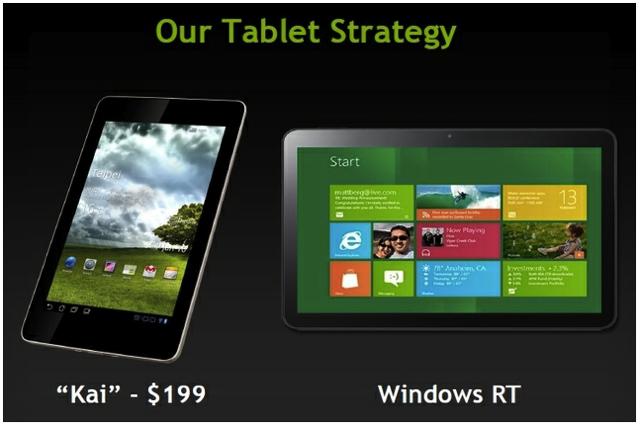 A $199 price tag has almost become the benchmark for an entry level tablet device and all credit goes to the Kindle Fire from Amazon. The sales numbers of  the Kindle Fire found an incredible number of buyers, which has prompted others to offer tablets at that price. NVIDIA is also eager to exploit the growing tablet segment, as is evident from the recent unveiling of the Kai tablet running the company’s latest and greatest Tegra 3 quad-core processor. This is also NVIDIA’s way of letting the world know tablet PCs built around the Tegra 3 chipset need not always command a price premium. Currently, all tablet devices based on Tegra 3 are priced $400 and up.

“Our strategy on Android is simply to enable quad-core tablets running Android Ice Cream Sandwich to be developed and brought out to market at the $199 price point, and the way we do that is a platform we’ve developed called Kai. So this uses a lot of the secret sauce that’s inside Tegra 3 to allow you to develop a tablet at a much lower cost, by using a lot of innovation that we’ve developed to reduce the power that’s used by the display and use lower cost components within the tablet,” revealed NVIDIA VP, Rob Csonger.

Jen-Hsun Huang had earlier stated they are working on a project aimed at developing $199 tablets based on Tegra 3 and its now evident those have not just been empty words.

Interestingly, NVIDIA is using the same image as that of the Eee Pad Memo that Asus had shown off at the CES event in January. Asus had also announced then that the Memo will cost about $250, though not much has been heard of the Memo thereafter until it emerged at the NVIDIA conference as the Kai. What this means is that the Kai might actually be the Eee Pad Memo, but will be priced at $199. The same goes for the upcoming Google tablet as well.

In fact, NVIDIA has already stated several manufacturers are already in the process of developing low cost Tegra 3 tablets based on the Kai platform. If that is true, what is a surety is that the likes of the Kindle Fire or the Nook Color will need some serious tinkering with their hardware if they wish to survive in a post Kai world. As for consumers, they will be winners all the way, for who wouldn’t like to have the goodness of a Tegra 3 chip in a tablet that is priced at an affordable $199.