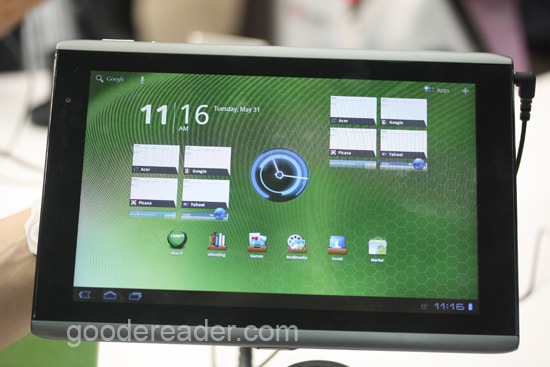 Acer had an incredible number of tablets at Computex 2011, but one of the most riveting ones in attendance was their Iconia A500 Google Android 3.1 Tablet PC.

The new Acer Iconia A500 should be released in June to select markets and will shortly start to enjoy a little bit of availability on a worldwide scale. The tablet is a 10.1 inch capacitive multi-touchscreen display with a resolution of 1280×800 pixels. It has a great internal processor with the Nvidia Tegra 250 Dual Cortex A9 Processor and around 1 GB of Ram. Your internal memory is relegated to about 16 GB but you can further expand this via the Micro SD card for an additional 32 GB.

The A500 features two cameras in order to snap photos or shoot some video. The rear facing edition is a 5 MP model and has a LED flash. The front facing model is only 2 MP, but is perfect for video chatting or conferencing.

This tablet has most of the normal ports you would expect of a higher end device in order to plug in a keyboard or various peripherals. It has a Micro USB, USB 2.0, and a Micro HDMI, which is solid because it really allows you to virtually plug anything into it. Of course, it also has a built in microphone, stereo speakers, and a 3.5 mm head phone jack.

The Iconia A500 impressed me due to the fact that Acer was not relying on the stock Honeycomb experience in order to drive people to purchase it. They had lots of excellent sub menus that organized your applications into more palpable screens. It had things broken up into Multimedia, Game Zone, and Reading. The Acer Lumiread application was very exciting, and since we love our e-Reading at Good e-Reader, we dove into this application.

The Lumiread app allows for a ton of customization via the settings menu right off the bat. You can change your font size to about 6 default font sizes. It also has a neat nighttime reading function that put white text on a black background. This would be perfect because as you know reading on a white background at night ends up straining your eyes. One of the neat functions on this app is that you could pinch and zoom the text on a certain page. Although when you did that it did not retain your settings from page to page. You actually had to hit a dedicated button to offset the changes you made in order to skip to the next page. I see the pinch and zoom feature to be not that great with an ebook but would be quite excellent with a PDF file that you NEED to zoom in on specific areas. Speaking of such, the Lumiread app has categories to separate books by PDF and eBooks and also genres such as Mystery, Suspense, and Thrillers.

In all, this tablet was very slick and polished and I dig the fact that Acer, with their entire Iconia line of tablets, has a docking port on the bottom of the tablet. This will insure that people who like to type on physical keyboards will not be left out.

Finally lets get to connectivity! It is fully compliant with the Google Android Market and Adobe Flash so you will have no shortage of applications to download and install. It supports many 2G and 3G networks so you are not locked to specific carrier. If you are with Verizon you can take advantage of their LTE network and get accelerated speeds.