You are here: Home / e-Reader Reviews / Review of the Archos Arnova 8 G3 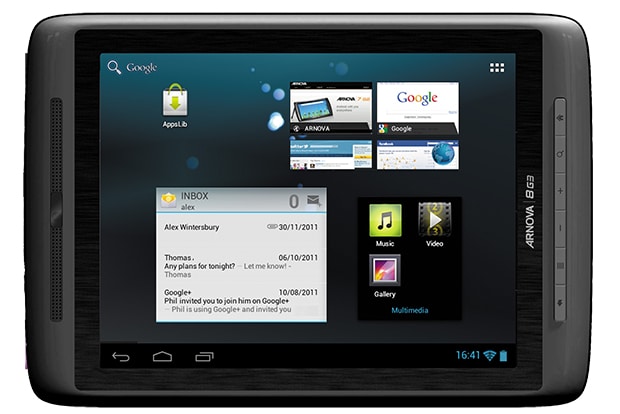 The Archos Arnova 8 G3 is one of the world’s few eight inch Android tablets. In a world of 7 inch devices, this added screen real estate makes reading and consuming media a little bit easier. One of the most exciting elements is the front facing speaker to give you a superb audio experience, while maintaining a fairly vanilla version of Google Android 4.0.

The Archos Arnova 8 G3 features a 8 inch capacitive touchscreen display with a resolution of 1024×600 pixels. Underneath the hood is a 1.0 GHz ARM dual-core CORTEX A9 OMAP 4 processor and 1 GB of RAM. It also has 4 GB of flash memory and can be expanded via the MicroSD for an additional 32 GB. I found that the hardware makes the tablet fly fairly fast and multitasking applications and games is a walk in the park.

This device is fairly slim (11.5 mm) and light (510 grams), which is enough to hold it in one hand for your average movie or TV episode.

One thing I really liked about the Arnova 8 G3 was the front facing web camera and front facing stereo speakers. Fairly often we review tablets that have them on the back or on the sides. There are only a few on the market that give you front facing speakers, like the Blackberry Playbook and upcoming Kobo Arc.

The one thing that was unexpected when we did our initial unboxing was the fact that the hardware buttons were built onto the unit. There were physical settings, back, home, and volume controls and various other buttons. You might find this redundant considering Android has softkeys, but, as we found out, most games and apps take up the full screen and you don’t see the softkeys. The hardware buttons are an easy way to quickly exit a game or app, without having to go through some tedious nag screens.

The Archos Arnova 8 G3 runs a fairly vanilla version of Google Android 4.0. When you are registering the unit for the first time you get some prompts to install 3rd party apps, not associated with Archos. This will give you Angry Birds, Tiki Cart, Aldiko, and a bunch of other games and apps.

New content is attainable from AppsLib, which is the indie store that comes bundled on it. There is plenty of content to be found, but I found the overall store experience was very “green.” All the menus, colors, and templates were various shades of green, which tended to all blur together after a while. To be fair, you can find most common apps on here, but it is light on e-reading and comic book apps. You might want to install our own Good e-Reader APP store if you buy this tablet, to have a wider array of content.

Like most Android devices, you can multitask fairly well, and during our testing we had around 15 things open and found no stuttering at all with 1080 P videos or playing games that often hinder poorly designed tablets.

The Archos Arnova 8 G3 is priced fairly well at $149.99, from major online retailers. There are no custom skins or bloatware. It will allow you to quickly upgrade to Jellybean and get new features like Google Now. This device is not Google Certified, so you will not find Gmail, Play, Google Books, and various other core apps that you know and love. Of course, you will be able to install these from AppsLib or the Good e-Reader App Store.

This tablet is perfect for people looking for low cost alternatives to most high end devices that cost over $400.00. It is also fairly solid for reading comic books, newspapers, books, and magazines. The eight inch screen gives you more screen real-estate then the Kindle Fire, Nook Tablet, or Nexus 7.