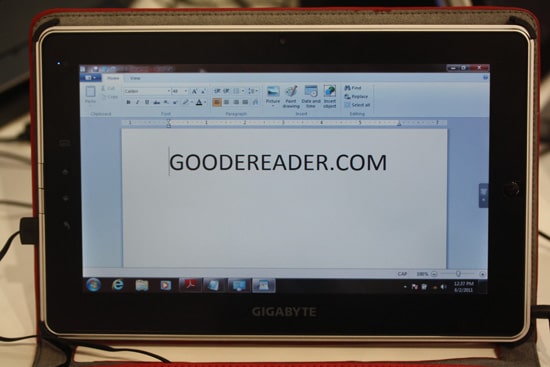 The Gigabyte booth at Computex 2011 had only 1 new unreleased product and that was the new Windows 7 based Gigabyte S-1080 Tablet PC! This unit had a ton of accessories that made it stand out from the other tablets in attendance, such as a docking station with a DVD drive and a ton of ports.

Finally, it did have a SIM card slot, which means it supports 3G and Gigabyte said it would come unlocked so you might be able to ride a sweet connection to connect up the internet. If 3G is not your thing it also comes with WIFI and Bluetooth. It has a front facing web cam, but it is only 1.3 MP, so while you might not get the best resolution, at least it’s something. The one thing I really liked about the device was the inclusion of the Ethernet port so you can physically connect it to your modem or router.

My impression was that it felt rather heavy in your hands and might not be too easy to always be holding it with one hand to do your mobile computing. It seems though Gigabyte intends for you to not hold the device exclusively, but using the optional docking station. The docking station is very sweet! It had 4 USB ports, microphone, headphone jack, VGA, and a HDMI connector to plug it into your monitor. Gigabyte mentioned the docking station will not come with the tablet, but will offer it for around $60 to $100.

All in all, this seemed like a very responsive unit and it also has a optional mouse on the side of it in order to not rely on using the touch screen to move the cursor around. Unlike other Windows 7 based tablets there was no custom UI. The best example of a custom UI in a Windows based tablet has to be the EXOPC, and I would recommend that over this one.