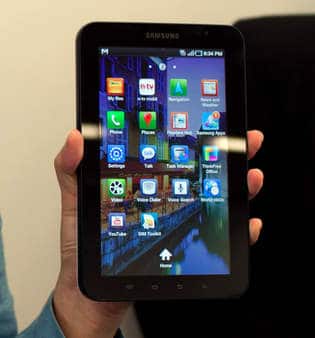 This is the aftermath of the success that the Amazon Kindle Fire has enjoyed. A whole new tablet segment is developing, where companies like Amazon, B&N, or Kobo will offer tablet devices that your wallets will love. The strategy seems to have been successful enough to entice Samsung to have a presence in this emerging segment with a new tablet device they are developing. Code named GT-P3100, the tablet device is still in a nebulous stage and betting on it might not be the wisest thing to do.

The tablet is believed to sport a 7 inch 1024 x 600 pixel display, which incidentally is the same as Samsung’s very first tablet device, the Galaxy Tab 7. Further, the tablet will likely have an ARM11 mobile processor, which would mean that Samsung plans to use the Samsung S3C6410 Application processor on the tablet. This would enable the tablet to go up to speeds of 800Mhz. The tablet is therefore expected to boast a good battery life, given the low power ARM Processor that it is expected to have. Other details of the tablet are not known, like whether a camera will be present, or what the OS will be (it is expected to be Android 2.3 Gingerbread).

We have already have a lot of tablet devices in both the 7 and 10 inch segments, most of which can’t be called cheap but usually have all the features loaded. While the segment currently led by the iPad seems to have settled down, the budget segment will take some more time to reach that stage. Until then, it’s not a bad idea to have many of the mainstream players develop a presence.