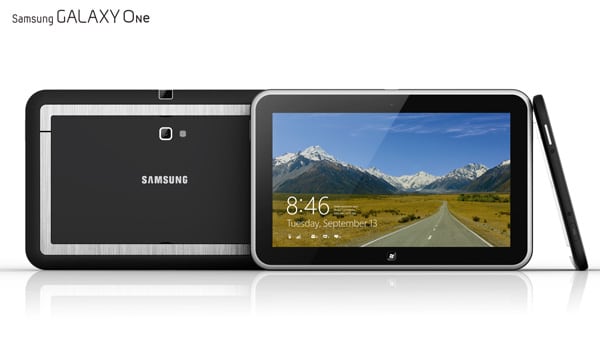 The Galaxy One is a brand new addition to Samsung’s tablet lineup and it looks mighty sweet! The overall aesthetics of the device is due to noted designers Laura Hong and Charles de Belizal.  The Galaxy One departs from the other Galaxy branded tablets from Samsung by using Windows 8 instead of Android.

However, that is not the only special aspect of Galaxy One since the tablet scores with its unique design and functionality. Sporting dimensions of 305 x 195 x 14 mm, the tablet comes with a thick metal cladding all along the edge. Also along the tablet’s rear is a stand with a brushed aluminum look which can be used to make the tablet to stand at an upright or at a lower angle. Further, the tablet will also come integrated with a projector of its own. Then of course there is the goodness of Windows built into it.

Over and all, the Galaxy One is a nice tablet concept. Pity its just a concept device.