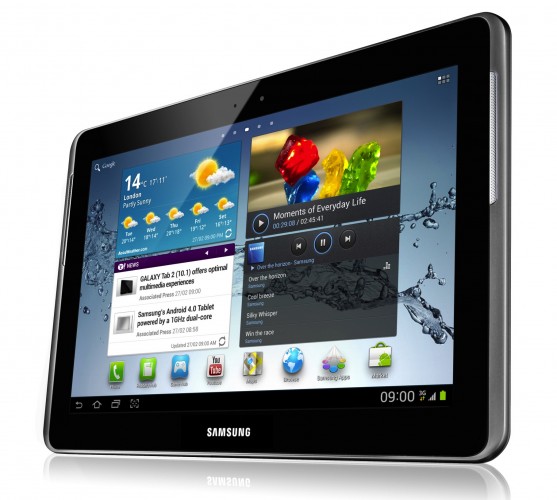 The Galaxy Tab is passe and its time we wake up to the next gen Galaxy Tab 2 family of tablets. Samsung has already launched the 7 inch version of Galaxy Tab 2 and now it’s time for its 10.1 inch cousin to hog the limelight. However, the Galaxy Tab 2 10.1 is not the earth shattering sort of device that can take on the upcoming iPad 3, which is already being touted to take the tablet war to the next higher level. Rather, the new Tab 2 10.1 can well be considered a revamped version of the Tab 10.1N which was launched to dodge Apple’s legal eagles.

Spec wise, the 10.1 inch Galaxy Tab 2 is powered by the same 1 GHz NVIDIA Tegra 2 CPU which operates in conjugation with a gig of RAM. The tablet also retains the Bluetooth 3.0 connectivity, along with the front and rear cameras that we are already familiar with on the original 10 inch Galaxy Tab. Up front also lies the same 1280 × 800 pixel LCD panel though for a change, the new Tab 2 10.1 will run Android 4.0 ICS out of the box with the Sansung TouchWiz UI built on top of it. On board storage will be 16 and 32 GB along with a MicroSD card slot to allow for more while keeping the entire thing running will be a 7,000 mAh power source.

A good thing with the new tablet is that we won’t be kept waiting for the new tablet too long as it will go on sale worldwide from March itself. That said, the new Galaxy Tab 2 10.1 isn’t also a device that is to be waited for with bated breath. What also seems evident is that the Galaxy Tab 2 set of devices — both the 7 and 10.1 inch versions — follow a specific pattern, that of including a few tweaks here and there and pre-load then with Android 4.0. If that be the case, we might well be seeing Galaxy Tab 2 versions of the 7.7 and 8.9 inch versions of the Samsung tablets coming next. The real tablet surprises from Samsung may well be seen at the MWC and it will be interesting to see what naming convention they follow. The Galaxy Note 10.1 is already expected though keep watching for more developments on this.