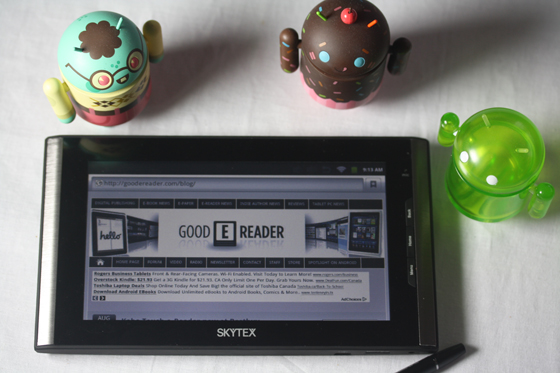 Skytex recently garnered a tremendous amount of attention with their Groupon offer on the Skytex Primer Pocket for $65 ($129 value) and—one of our favorite tablets we reviewed this year—the SkyPad Alpha $129 ($199 value). The company had record orders and they are using some of the revenue to develop new tablets to be debuted later this year.

The first one is a capacitive screen version of the Skypad Alpha. It has a 7” capacitive 800×480 resolution screen (5-points of touch), a 1.2GHz Arm Cortex A8, Mali-400 GPU (same as in the Galaxy S2), 512mb RAM, HDMI 1.4 out, mini-USB OTG, 4GB storage, micro SD, mic, and webcam. Unlike the Alpha, it won’t have Bluetooth, but it will be very competitively priced. It has high end finishes like an aluminum body and flush glass top. They are looking to launch in December, around the 10th-15th.

Skytex is also also gearing up to launch an 8” version with a 1024×768 res screen. Same CPU/GPU combo, front/rear cameras, GPS, and 3G option. Nothing is set in stone on this one, but the company is trying to get it finalized soon. They intend on bringing a prototype with them to CES and have production ready units by Feb.