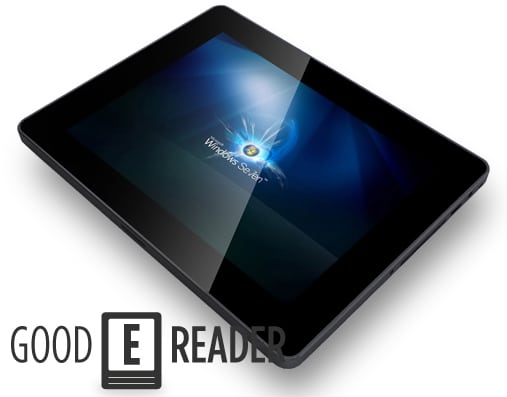 Skytex has just informed us that they are bringing a new tablet into their portfolio and it will be their first Windows based device. It is poised to be released October 2nd 2011 and we should be bringing you a full review of it soon thereafter. Today the company reached out to us to give us the full specs of the the Skytab S-Series.

The Skytex Skytab S-Series has a 9.7 inch TFT-LCD capacitive touch display with a resolution of 1024×768 pixels. Under the hood it is running on a Intel Atom N550 1.5 GHZ dual core CPU and has 2 GB of DDR3 Ram. Internal memory is very solid on this with 320 GB, so you should have no problem storing your apps and media content.  If you want to expand the memory, you can do it with the MicroSD card up to 32 GB.

It has two stereo speakers and a 1.3 MP front facing webcam for video conferencing. You can connect this device straight to your television to stream 1080P videos with the HDMI out.  I dig the fact it is shipping with 2 full  USB ports, so you can easily connect a flash drive to it to load content right onto it.

You can connect up to the internet with the built in WIFI and there is also a 3G version that will be released sometime in the future. Finally there is  Bluetooth 2.1 support.

On the software side of things it will be shipping with Windows 7 Home Premium and MS Office 2010 Starter. Like the EXOPC, which this device borrows the UI from,  you will also get Microsoft Security Essentials.

We spoke today with Joe Von Fossen at Skytex about their relationship with EXOPC and what was involved in securing the license. He told us ” As for our relationship with EXOPC, it started almost a year ago. We’ve actually had our contract in place with them since 2010. Basically, I’m a hardcore geek and I read the blogs every day, all day long. I saw the coverage of the EXOPC UI and some others back then (like the now defunct Macallan UI). We were planning on coming out with a Windows tablet around that time and we knew we had to differentiate on the software level and make it more touch friendly. We contacted a number of these guys, including EXOPC. I had reservations because there was a lot of confusion at that time regarding whether they were a hardware or software company or both. Turns out they were mostly a software company, and now it seems they may be completely out of the hardware business. We entered into a license agreement, but then experienced several delays. We eventually went back to the drawing board because by the time we were getting everything ironed out, the single core Atoms became a less compelling story overall. We started development with the dual-core Atom and switched the screen resolution (from 10.1” 16:9 to 9.7” 4:3). EXOPC is currently only designed to support 1366×768, and we weren’t sure how long it was going to be to port it, or if it would be even feasible, otherwise we would’ve made the announcement much sooner. After meeting with the EXO guys at Computex, they got to play around with our tablet and loved it. They were so pleased with it, their Chairman/CTO said they could definitely make the port happen.”

It’s currently available for pre-order on Abe’s of Maine and some other online resellers at $599.