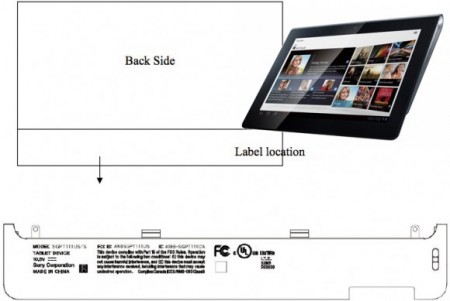 After the Sony S2 made it past the FCC only a few days back, now its bigger sized sibling’s turn to replicate the success at FCC. Four variants of the Sony S1 tablet – SGPT111US/S, SGPT112US/S, SGPT111CA/S and SGPT112CA/S – have been granted approval which comprises of two versions each for the US and Canada. The report also points out the four models are essentially the same. The model differences are just “for marketing purposes only.” So the only point of difference between the four models might be the storage space available on-board the tablets. However, Sony isn’t helping things either by having in place a confidentiality block on any live testing images that would remain valid for 180 days.

What this boils down to is that there are no real life images of the tablet in the public domain. What we have instead are graphic images of the lower back side of the tablets revealing the labels, which reveals very little information. What we can see is that all the variants would feature WiFi b/g/n and Bluetooth 2.1+EDR connectivity options. It is interesting to note that the tested slate is listed as a “production unit” that is equipped with the same HSPA+ WWAN chipset that is compliant with Ericsson AT&T.

According to a previous announcements, the Sony S1 and S2 are likely to hit markets by fall this year. Also, while the two tablets from Sony continue to be elusive, we do know the tablets will be running Android’s tablet centric OS Android Honeycomb which supports gaming, media streaming, and other functions. No word on pricing either at this stage, nor specific hardware details like its internal make up, though we do know the S1 will work as a universal remote thanks to a built-in IR emitter.