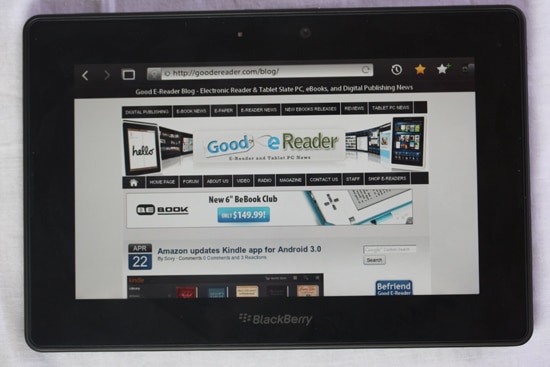 The Blackberry Playbook is in a precarious position as Sprint announced today that will not carry the 4G WIMAX version of the device. Instead RIM is going to focus on 4G versions issued to Verizon and AT&T.

Research in Motion is having a hard time trying to sell the Playbook to various companies that run LTE or 4G networks. Verizon famously snubbed the Playbook once before, but that is not stopping RIM from continuing to woo them. Verizon seems to be the company of choice because by the end of the year the company will have over 175 different markets supported with ultra fast connections. While AT&T is a lower tier option because they do not have the support for fast connections and only have a presence in 15 markets.

RIM is going to be putting the 4G version of the Playbook through FCC certification this fall, but things look bleak. The device saw scathing reviews right out of the gate and still does not have full support for email, android apps, and many other critical features.

Hopefully with the LTE an 4G versions of the tablet coming out this fall this will mean good thing for Canadians! By the end of the year, Rogers will be rolling out its LTE network in all major Canadian markets and already most other markets have 4G. Here is hoping that the new version of the Playbook with a 4G/LTE model will finally have all of the major features it was promised to have at launch.