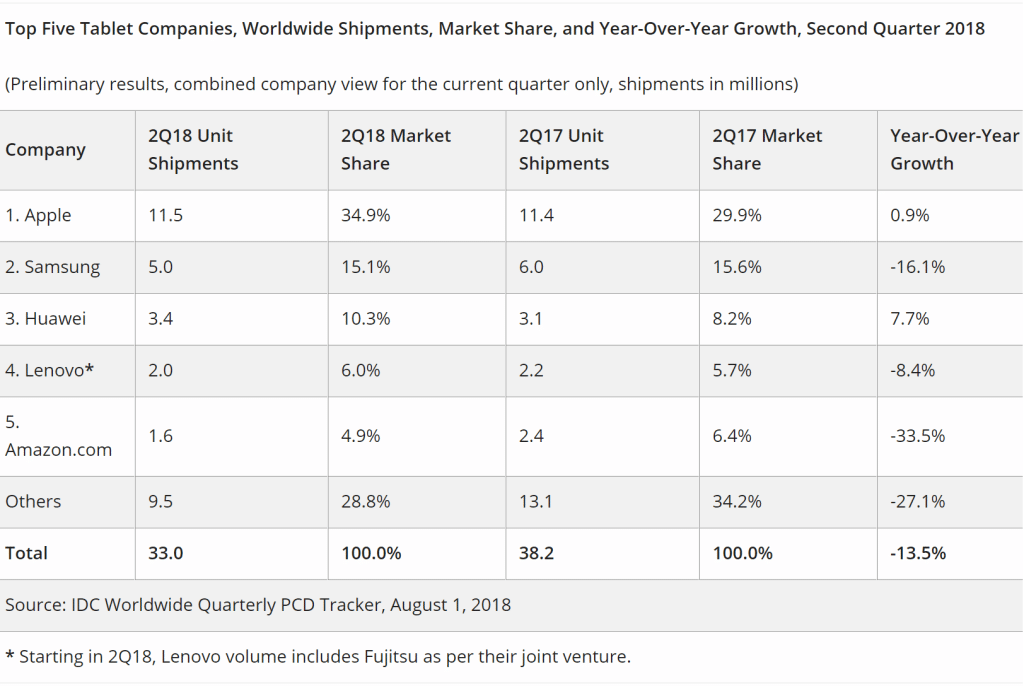 Global tablet sales are in a state of perpetual decline. They have been down spiraling downward for 15 straight quarters, and the second quarter of 2018 there were 33 million units sold. This is an overall decrease of 5 million units when compared to the same quarter last year. In previous years, tablet sales had been declining by single digit numbers, but this year it has surpassed double-digits.

“Though consumers and businesses alike have shown interest in the detachable form factor, those operating on tighter budgets have had very few options available to them and hence some have opted for traditional PCs,” Jitesh Ubrani, senior research analysts for IDC, said in the release. “However, with the launch of the Surface Go, Chrome OS-based, and hopefully a more affordable iPad Pro in the future, the detachable category still has a bright future, provided the performance and software lines up with users’ expectations.”

Apple and Huawei were the only two companies that saw any growth at all, with Huawei leading Apple by nearly 7%. Apple still came out on top when it came to total shipments, with over 11 million, totaling a third of all tablets shipped across all major companies.

Samsung shipped 1 million fewer tablets than in the quarter a year ago and ended up losing 0.5 points of market share (from 15.6 percent to 15.1 percent). The company saw both slate and detachable shipments decline, though yesterday it announced the new Galaxy Tab S4 and Galaxy Tab A 10.5 that may help it rebound a bit. Amazon saw a 33% decline in Fire tablet sales year on year, which does not bode well for the future of their cheap tablet ambitions.