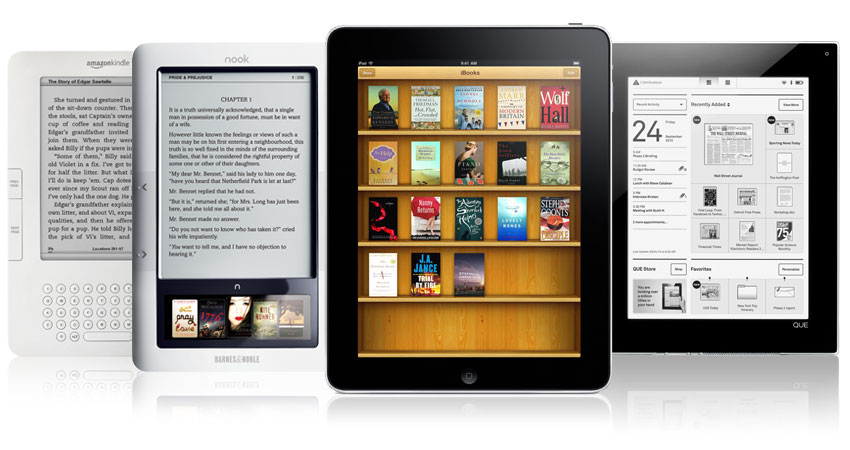 Although the question of whether to buy a tablet or an e-reader has been with us since the day the first e-readers were released, the answer used to be very simple. There was a huge gap in price between the average tablet and the average e-reader, with e-readers coming out cheaper every time. If your primary motivation for having a handheld device was to read, then it made no sense to spend the extra money to acquire a tablet.

Now, though, times have changed. Trading figures for the past twelve months (and, if we’re honest, earlier than that) for both tablets and e-readers have seen a downturn in sales, with even Apple’s latest offerings unable to reverse the trend. You can get a reasonable tablet for the same price you can get a good e-reader, and so it’s sometimes difficult to identify a good reason to opt for an e-reader when tablets have so much more functionality.

Whether an e-reader is still the right option for you will depend on how you feel about a number of different factors, which we’ll explore below.

Can you focus on reading?

This is a very basic but important question. It’s been noted by many sources that reading is in decline in general, and has been ever since the internet became so readily available. We all spend too much time trawling through the web and scrolling through social media apps to actually sit down with a good book and read.

We all know that e-readers are more convenient than piles of books; that’s what attracted us to the devices in the first place. An e-reader will allow you to focus on reading whatever you’ve chosen to read, and that’s it. Even if you settle down with a tablet to read using one of the many e-reading apps that are now available, all of your other apps are only the push of a button away. Distraction is too readily available, and you’re less likely to focus on the task at hand. If you want to focus on reading, limit your options and get an e-reader.

How are your eyes?

One of the biggest benefits that came along with e-readers, and a benefit that still applies today, is that the screens are purpose-built for hours of reading time. They’re not subject to the glare and strain that comes with constantly staring at an LCD screen for extended periods. The impact of LCD screens on ocular health is a known phenomenon, and it’s all to do with the fact that tablet screens are backlit. Your eyes are looking straight into the source of the light, and that’s not good for you.

Do you enjoy enhanced e-books?

One of the innovations that have come along with e-books is that they have ‘enhanced’ content. That sometimes comes in the form of basic animations, which some e-readers can handle. Other times, it comes in the form of interactive charts, maps, and videos. That’s something e-readers can’t cope with, but tablets can. It might seem bizarre that e-books were originally designed for e-readers, but have gone on to make themselves incompatible with those very same e-readers, but that’s where we are. If the books you want to read contain advanced elements, you’ll need a tablet.

How much extra functionality do you want?

E-readers are capable of doing a little more than just displaying books for us to read. Many of them also double up as music players, and they can perform that task just fine. Any modern e-reader should also be able to do text to speech, so even if your book isn’t an audio-book, you can still have it read out loud to you if you so desire. The better e-readers also come with a basic web browser. That’s capable of doing basic jobs, for example logging into and reading a news website, but the low screen refresh rate means they won’t be capable of much more than that.

If you want to be able to browse websites in the same way you would on a laptop, you need a tablet. The same also applies if you play games. Almost nobody buys a tablet for the sole purpose of playing games – that’s what smartphones, full-sized PCs and consoles are for – but there are some types of games which are popular and easy to play on a tablet. Many people like to play online slots, for example. Online slots are designed to be easy to access, so don’t make huge demands on processors, but the majority of current online slot games are video slots, with detailed graphics and animations. The screen refresh rate on an e-reader isn’t even sufficient to track the spinning of the reels on a slot game. If that’s important to you, that’s another reason to opt for the tablet.

So which option should you go for?

We’ve just looked at two reasons why you should opt for an e-reader, and two reasons why you should opt for a tablet. In the end, though, it comes down to what you want from a handheld device, and what you’ll ultimately use it for. If your laptop is always with you, or you play games and browse the web on your smartphone, you probably won’t be missing out on anything by opting for an e-reader. If you want to do anything much more advanced than just enjoying some reading time, though, you’re better served by a tablet.

E-books seem to be future-proof, and are here to stay. The media by which we choose to enjoy them on, however, may shift decisively in favor of tablets in the near future.