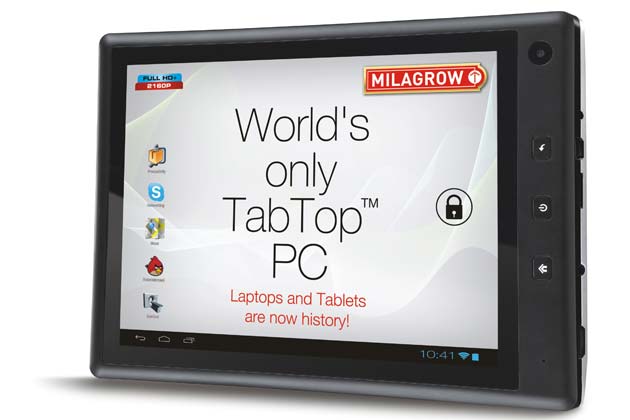 There has been a deluge of both high end and budget tablet launched in India recently but leave it to Milagrow HumanTech to launch the thinnest of them all. Measuring just 6.5 mm in thickness, the TabTop 7.4 also boasts of some decent specs. With a 1.2 GHz, ARM Cortex A8 processor and a Dual Mali 400 MP dedicated graphics processor under its hood, the tablet together with 512 MB of RAM promises breezy performance. The tablet runs Android 4.0 ICS and boasts of 4G, 3G as well as 2G compatibility via external dongles. Other connectivity options with the TabTop 7.4 include Wi-Fi, LAN, VPN and Ethernet.

Further, the TabTop 7.4 is powered by a 4000mAh which the company claims has decent backup times. The tablet is available in 4 GB and 16 GB internal memory options and also supports up to 32 GB via external microSD cards. That is not all for the tablet is also compatible with external hard disks of up to 500 GB. The tablet’s 7 inch display boasts of an aspect ratio of 4:3 ratio (800×600 pixels) instead of the more prevalent 16:9, which the company claims is just right to open up more viewing area when compared to other tablets in its class.

The tablet comes pre-loaded with as many as 55 apps while the on-screen keyboard supports both English and Hindi. Other aspects of the tablet that only adds to its appeal include speech-to-text feature along with ‘ready-to-use functionality with 60 plus language boards’.