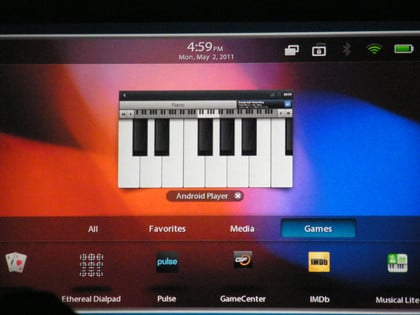 Since the Blackberry Playbook received the fabled OS2 update last month, the tablet has had a new lease on life. It helps when most retailers are now selling it for $199 and it was the top selling tablet in Canada in February.  We have been fervently converting Android Apps over to the Playbook BAR format for the last month and have noticed a trend with the most popular apps available. Below is an indication of the ones that are most in demand according to our readers.

Google Maps – The popular Maps app on the Playbook gives you GPS and tons of cool features.

Amazon Kindle – Over 13,000 downloads on this reading app and it is a crying shame Amazon will not make an official app for the Playbook, but they did the HP Touchpad. Go figure.

Dropbox – Popular file sharing and cloud storage locker proves to be very popular with over 7,500 downloads.

Android PDF Viewer – The Playbook has a tremendous shortcoming with quality PDF apps and the default Adobe version is not up to snuff. This app continues to be the most popular PDF reader on the Playbook.

Skype for Playbook – You can’t make calls or do any audio functionality, but people continue to enjoy the SMS style messaging aspect of it.

Twitter – Continues to be one of the most popular social networking apps and has no problems running on your device from the converted Android file.

WhatsApp Messenger – Currently one of the most coveted Playbook apps with the ability to share a slew of different media options.

Pandora – One of the definitive music apps comes to the Playbook by way of Android.

eBay – PAYPAL and EBAY are two of the major platforms not to be found anywhere on the Blackberry QNX Platform. You can enjoy the shopping, payment, and everything else through this app.