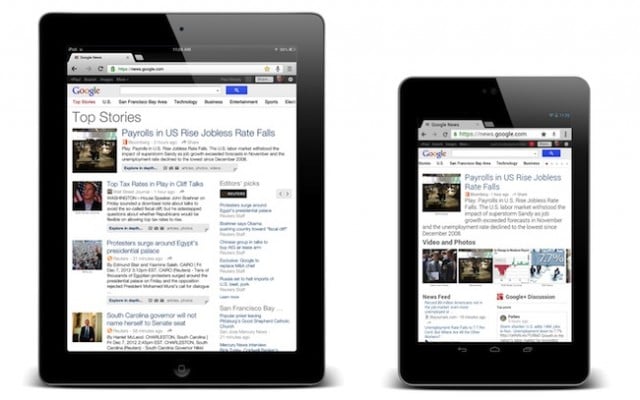 One of the best (and also the easiest) ways to stay informed of the latest happenings around the world is to keep an eye on the Google news feeds. With tablet PCs making some serious inroads into the traditional computing scene, it was just a matter of time before Google did something that would make browsing the latest news stories all the more convenient. With touch-based tablets, Google has introduces simple horizontal swipe gestures to browse between categories, while a tap of the ‘Explore in depth’ button will let one have an in-depth view of the topic selected. Also, the articles have been placed with enough space in between to allow better readability.

Google News has been optimized for viewing on a 7 and 10 inch device and will be made available in the US over the next few days, followed by a world launch later on.

Interestingly, the changes to the Google News UI comes close on the heels of Youtube’s tablet optimization. The world’s favorite video sharing site now has a much more clean and organized look to it, with a pane on the left allowing to select the categories and such, while the relevant videos are shown in larger tiles along the right in two separate columns. The changes though are applicable only to Android based tablet’s with 10 inch displays.

The New York Times has updated its news app for Android based tablets, so that it now has a new user interface that makes going through the news stories more convenient. What makes the new UI special is the fact that it now is capable of adapting to the specific tablet device’s display characteristics to deliver the best possible viewing experience. The update also provides users with greater control over features, such as Breaking News, Sports, and so on.

AT&T and Samsung got together to do something that has been long overdue—update the Galaxy Tab 8.9 operating system to Android 4.0 ICS. AT&T perhaps is the last to come up with the ICS update to the Tab 8.9 device, long after the Jelly Bean update has been widely released. While the 8.9 inch Samsung tablet is one step closer to a modern OS, the ICS update is not even being rolled out over the air. Instead, users will have to get it via Samsung’s very own Kies application. Plug your device to your PC running Kies and everything else happens automatically. It is advisable to back up all your data as the update is designed to bring about a system wide change to the device, complete with new settings, a new UI, several advanced features, and much more.

New research data obtained by Chitika reveals the vast majority of tablet web traffic originated from the Apple iPad and iPad Mini devices. Both the Apple tablets contributed 88 percent of all tablet web traffic. Out of the remaining 12 percent, Nexus 10 and Nexus 7 accounted for just 0.91 percent, and an even more miniscule 0.13 percent originated from the Microsoft Surface.