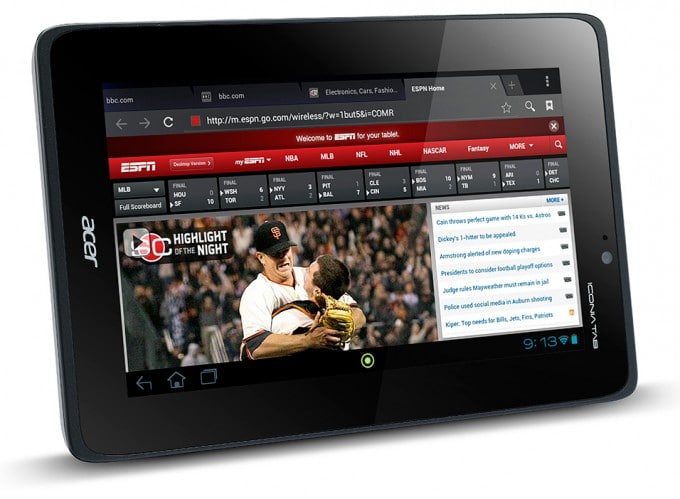 Among the top tablet news of the day, the one that has been attracting a lot of attention is a Nexus 7 variant that would cost a measly $99. This is a new low for tablet costs after Amazon first popularized the $199 price tag with the first gen Kindle Fire. While Amazon bettered that with a $149 price tag on the new refurbished Kindle Fire, Google’s attempt will be a new benchmark.

Unfortunately, nothing is confirmed as yet, though Digitimes is claiming intel from supply chain manufacturer indicate the device is in the making. The Taiwan based site further claims the new entry level Nexus 7 will come with a single-core ARM chip sourced from China based company, WonderMedia Technologies. The report also claims that a HUVA TN panel made by Taiwan based HannStar Display will make up the tablet’s front. Asus has denied any involvement, and Quanta Computers is reported to be manufacturing the device. Asus has already stated that it had to make a lot of adjustments to produce the $199 version of Nexus 7 and it’s not surprising that the company might not like to be involved in the making of an even cheaper variant.

Quanta Computers has declined to comment, though unconfirmed reports indicate that the tablet could be ready for launch during the holiday shopping period.

Meanwhile, iPad Mini rumors seem to be peaking and that’s hardly surprising, considering we are less than a week away from an Apple event planned on Oct 23. Other sources say the tablet’s release is actually happening on November 2. Apple has never stated they are going to launch an iPad Mini on Oct 23 while the shipping date would be Nov 2. The sources claim the mini iPad will initially be launched in the US and UK along with a few other countries.

Also, while Apple may not be acknowledging the existence of such a device, there is no denying there does exist a market where a small sized iPad can thrive. The device with a 7.85 inch sized display will fill a niche flanked by the 9.7 inch iPad on one hand and the iPhone 5 and iPod on the other. The iPad Mini, if launched will serve as a more portable and a cheaper option for those for whom the regular iPad presents the opposite attributes.

In another development, Sharp has come up with a new Android tablet. With the spec sheet mentioning a 7 inch device that’s built around a Qualcomm 1.5 GHz dual core MSM8960 chip, 1 GB of RAM along with 16 GB of internal storage, the AQUOS TAB SHT21 should easily be mistaken for any other tablet device. However, what makes the Sharp tablet special is its IGZO display that promises increase battery efficiency by more than double.

The way it has been achieved is by making the pixel size smaller along with some more tech wizardry, so that they need even less power to maintain their illumination. The 1280 x 800 pixels even when least bright makes for comfortable reading and usage while being brighter than comparable device with the brightness set at maximum. What this means is that the 2040mAh battery is able to hold on to its juice 2.5 longer than the normal scenario.

There is no news when the IGZO display could be seen on other devices or when Sharp intends to launch the AQUOS TAB SHT21 in other countries outside of Japan. The tablet running Android ICS will be ready for launch in the domestic market by year end.

In another interesting development in the small sized tablet segment, Acer has launched a new device which it hopes will make things a bit more competitive to the likes of the Nexus 7 or the Kindle Fire. The Iconia Tab A110 is built around the NVIDIA’s Tegra 3 chipset that features Super 4-plus-1 quad core architecture with an additional fifth core that takes care of less demanding tasks, thus enhancing battery life that much more. Acer is claiming the tablet will have 7.5 hours of run time on a single charge.

The tablet includes a 1 GB RAM and 8 GB of storage. Other niceties include a microSD card slot, a micro USB and micro HDMI port, front facing 2 megapixel camera (none at the rear), WiFi, Bluetooth 3.0, along with a thin and light build. The 7 inch display packs 1024 x 600 pixels and runs the latest iteration of Android ICS.

Acer has stated the tablet will be up for the taking in the US and Canada from Oct 30 and is priced a competitive $230.