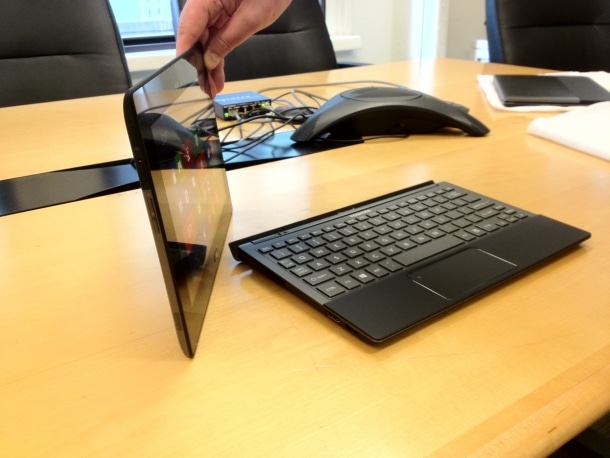 While it was expected that Windows 8 would be the star attraction of Computex 2012, what did come as a surprise was the number of convertible tablets that manufacturers put up on display. Toshiba also has a convertible tablet to show off (predictably running Windows 8), joining others such as Acer, Asus, and Samsung.

Toshiba seems to be a little more secretive of its device. It is in no mood to reveal what is inside, though it resembles the Transformer Prime, in being attachable to a separate keyboard. The keyboard in turn houses a separate battery unit while also offering three USB ports as well as an HDMI slot. The keyboard is therefore not only serving as an input device but also a power source and connectivity hub.

Another tablet Toshiba displayed comes with a keyboard that is not removable but instead can be slid beneath the display. This reminds us of the Asus Eee Pad Slider and while the concept is good, the keyboard can add to the weight when the device is used purely in tablet mode.

However, while the device Toshiba introduced does not break any new ground, the company, for its part, said: “At this point, we will not be providing any additional information or specs on these products.”