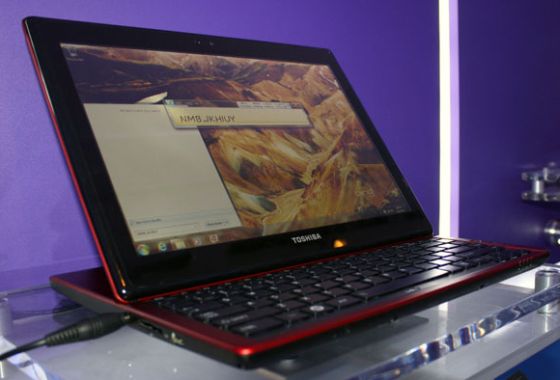 Toshiba is working on a new convertible device that can both be a tablet and a netbook at the same time. However, the device was nowhere to be seen at the Toshiba booth at the just concluded CES. Instead, the Toshia Portege M930 was seen jostling for space at the Windows camp among a sea of other ultrabooks.

Under its covers, the Portege M930 plays host to an Intel Core i5 processor, 4 GB RAM, 256 GB hard disk drive, along with a display size of 13.1 inches packing in 1280 x 800 pixels. Of all the netbook specs, one aspect that makes the Portege M930 so special is the manner in which it transforms from a netbook to a tablet device running Windows 8.

One just has to push the screen until it is facing the other way round and then fold it down over the keyboard. This swivel action is sturdier than the sliding action type mechanism seen on other such convertible devices such as the Asus Eee Pad Slider or the Samsung Series 7 Slider.

However, at 4.2 pounds, it is well out of the ultrabook segment. That’s a big disadvantage with the Portege M930, as it almost rules out one-handed tablet operation. Further, the device can also be cumbersome for use as a netbook as well, since a narrow keyboard has rendered the touchpad to just the right edge of the keyboard. But then, the Portege M930 does offer an array of ports that one might expect of a netbook.

However, the Portege M930 is still far from being a market ready product as the prototype on display at the CES was only responding to stylus inputs and not finger touches. So its isn’t too surprising neither Toshiba nor Microsoft are offering a launch window or expected price range. But then, not all products revealed at the CES go on to reach markets. The Samsung Series 7 Slider is one such.