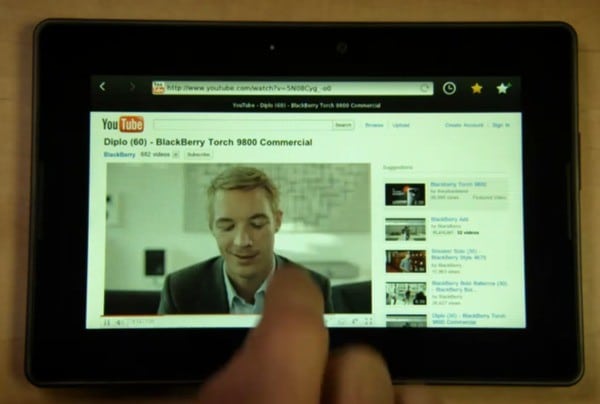 The PlayBook tablet PC from Research in Motion is all set to be unleashed in the heavily contested tablet segment soon. However, things have undergone some drastic changes ever since the PlayBook was first unveiled in September last. Perhaps the most noticeable change has been the coming of the Android version that has been developed exclusively for use on a tablet like device – Android 3.0 Honeycomb. There has also been a lot of tablets that have been built based on the Honeycomb with the most prominent amongst them right now being the Motorola XOOM – an extremely competent piece of hardware. Of course there are a lot more coming and the most striking aspect of the new breed of tablets is that nearly all of them boasts of a dual core heart to ensure things move at a fast pace. Then perhaps, the most important change right now is that it’s now iPad 2 that the PlayBook will be up against, a much improved tablet compared to the already formidable iPad. So how does the PlayBook match up to the competition that is going to be all the more relentless in the coming days? Let’s find that out.

To begin with, one unique aspect with the PlayBook is that it will start shipping sans one important feature – a built in 3G component. Why so? RIM has designed the PlayBook to work in conjugation with BlackBerry smartphones. The PlayBook will have Wi-Fi to get online but will have to get all its work done in conjugation with a BlackBerry. The central theme here is to present a highly secured environment and the tablet will communicate with the Blackberry over a highly secured Bluetooth connection to have access to corporate or consumer email along with other features such as address book, calendar, BlackBerry Messenger and so on. Once the link is broken, everything from the PlayBook is instantly deleted to be stored on the BlackBerry.

The thinking behind the move is that the PlayBook has been conceived for use mostly in the enterprise sector and almost everybody here already own a BlackBerry. Security of data is also of paramount importance for business professionals and the PlayBook will certainly suffice to their business needs. However, company officials have stated there will be software upgrade later on that will include native email, calendar and address book apps in the PlayBook tablet itself. The tablet though will come pre-loaded with the entire suite of editable word processor, spreadsheet and presentation software.

Further, PlayBook with 3G modems integrated into them are also planned for a release later in the year. The 3G PlayBook versions will be compatible with high-speed WiMax, LTE and HSPA+ networks and will also include the options to communicate directly to RIM’s enterprise servers. RIM has already named Sprint to be their carrier partner in the United States.

Another interesting aspect of the PlayBook tablet is that its bezels are also sensitive to touch inputs, perhaps the first tablet to be so. Hence, a gentle up swipe from the bottom will minimize what is on screen while the opposite gesture will lead to in-app options. Similarly, a sideways swipe action will toggle between the applications while to launch the virtual keyboard, all that is required is a gesture at the bottom left corner.

The rest of the tablet specs are impressive too to say the least. Like the PlayBook is based on a 1 GHz OMAP 4430 dual core processor from Texas Instruments coupled to a 1 GB RAM. Running the show for the tablet is RIM’s own QNX based operating system that supports multi-tasking. Then the PlayBook is also equipped with the now almost common features such as a twin camera setup – 3 megapixel camera at the front along with a 5 megapixel camera at the rear, Wi-Fi 802.11 a/b/g/n, Bluetooth 2.1 + EDR, microUSB , micro HDMI and DLNA connectivity along with support for both Adobe Flash as well as HTML 5.

However, while all of these surely makes the PlayBook to stand apart from the tablet me-too’s that are getting launched almost every other day, the two all important piece of the PlayBook puzzle continues to elude us. We yet don’t know for sure when the PlayBook will be launched or how much will it be priced at. RIM though has been kind enough to provide us with some indications. Like company sources have announced the tablet will eventually be priced below $500. The PlayBook will be available in memory size options of 16, 32 or 64 GB and its now known if the highest speced tablet will have a price tag of below $500. However, if that turnes out to be true then there shouldn’t be any reason to complain. As for the tablet’s availability, the PlayBook is expected to be a market reality towards April. In fact, it can be even before April as some unconfirmed reports point out the PlayBook might be released on March 27, the same day that Motorola has confirmed the launch of Wi-Fi only XOOM. Meanwhile, OEM parts has already reached TrueSupplier which now has stocks of the screen and bezel along with the digitizer in black for for $82.99 and $59.99 respectively. This shows the PlayBook isn’t too far from its official release.

via reuters, via n4bb