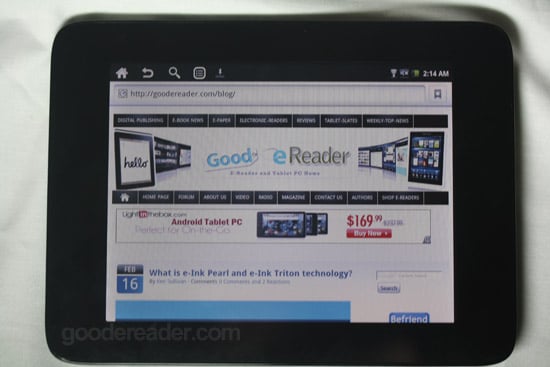 The Velocity Micro Cruz T301 was a tablet released at the beginning of the year and has been one of those devices that never sold very well. Due to this factor many companies are now offering it at a tremendous discount!

So what is this tablet all about? The Velocity Micro Cruz Tablet T301 is newest offering the company has put fourth to date. It features a 7 inch TFT LCD capacitive touch screen display with a resolution of 800×600 pixels. It currently only has a aspect ratio of 4:3 and has a built in G-Sensor that will give you a full 360 degree rotation. This means not only will it go in landscape and portrait mode, but it will switch to portrait mode even if its upside down. This is a great feature and its baby brother the Velocity Micro Cruz Reader only does 90 degree rotation.

This new tablet has 256 MB of RAM and 4 GB of internal memory. You can further enhance the memory via the 4 GB SD card that comes bundled with the device. Speaking of bundled features you also get a nylon carrying case and a stand for the tablet to sit on. There is room on the stand for the power adapter to be plugged in, so you can watch videos, or use it as a digital photo frame while not having to exclusively rely on the 6 hour battery life. The stand also is weighted, so it is not flimsy plastic like the stand that is bundled with the Pandigital Novel.

The Velocity Micro Cruz Tablet also supports more audio and video codecs then its previous models. For audio playback it supports Mp3, WMA, AAC and WAV and video formats supported are Mpeg-4, H.263 and H.264. If viewing pictures is your thing, it does have support for PEG, GIF, PNG, BMP image support.

This is the latest generation tablet that Velocity has offered and it is lacking in a few key departments. The inability to play embedded Youtube videos and Flash Content is a huge deciding factor. It’s also 2011 and with a new product that has feeble resolution such as the 800×600 that this offers and 4:3 aspect ratio is abysmal. Another feature that severly lacks is the older version of Android. Using 2.0 means we cannot take advantage of live wallpapers or other great features.

If you can get past these lackluster features the design is solid and it looks like a really sexy device. I dig the fact the tablet is fairly responsive, especially the keyboard and switching between landscape and portrait mode.

Also, if you are not content to do business with Amazon, whose application comes pre-installed you do have options to load in your own reading applications. So if you download books from the internet you can load them on your SD card and read them in a program such as Aldiko.