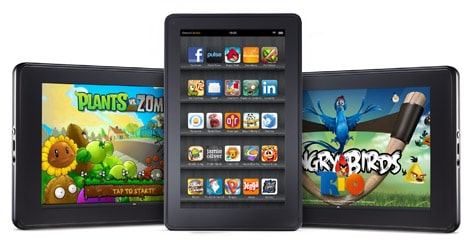 Amazon plans to roll out two new versions of the Kindle Fire later this year to solidify its position as the top Android Tablet provider. The company plans a 10.1 inch and undisclosed smaller version to appeal to a wider demographic. The Kindle Fire has been selling like hotcakes, with 3.8 million of them sold in 2011. Sources tell us that the company is going to exclusively focus on tablets during 2012, but where does that leave international audiences?

The Amazon line of e-readers appeals to a worldwide audience, with the ability to purchase books in most of the major countries. Often the eBook stores vary depending on where you live, and places like Canada focus on Canadian books (ditto with Germany, France, and Spain). The Kindle Fire, on the other hand, is a USA exclusive. You cannot buy magazines, newspapers, download apps, or rent movies with Amazon Prime if you live outside that country. You can buy books and get a free book every month, but you can hardly take full advantage of the ecosystem.

There is no doubt that the sales numbers Amazon is experiencing is influencing the company into a tablet direction. Apple, Barnes and Noble, and Kobo sell far more full color Android devices now than e-readers. With Amazon putting so much emphasis on the line of Kindle Fires, will they ever offer a version that plays nice outside of the States?

There are many facets that prevent the Kindle Fire from being utilized effectively in places like Canada. Most newspapers are only USA based and not very appealing to people who want their local papers. Amazon would have to land partners in each of the markets it wants to enter for the full color content. The Amazon App Store is another barrier because it is only available in the USA. Apps are mainly universal and many markets like Australia, UK, Canada, and others all speak English, so there are no localization barriers. Movies and TV Shows are a different beast entirely and one of the single biggest hurdles. Often, TV and Movies are negotiated from a specific region or country. It is very challenging to deal with companies who have different subsidiaries in different markets and the amount of cross-licensing deals is staggering.

I would not expect an international version of the Kindle Fire at all during 2012. The USA market seems to support Amazon’s ambitions to be the #2 Android tablet and a worldwide launch may be more trouble than it’s worth. To be fair, there are ways to work around these issues, such as setting up a VPN. If you live outside the USA, you can purchase a Kindle Fire from Shop e-Readers and download our own Good e-Reader APP store to get all your apps and games.