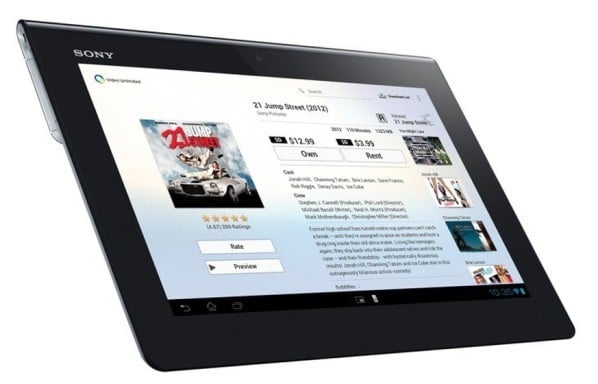 Sony had unveiled the Xperia Tablet S device at the IFA, though crucial pricing details were missing. They have now been revealed: $399, $499, and $599 for the 16, 32, and 64 GB versions of the Sony tablet. With the prices, Sony also made it known they’d like to be where Samsung is right now as far as Android tablets are concerned. That perhaps explains the pricing strategy, which is exactly the same as the Samsung Galaxy Tab though the Samsung tablet was launched almost half a year ago.

The Xperia Tablet S is the latest generation version of the Tablet S that Sony had launched more than a year ago and comes with a more evolved design approach, better hardware, and a slimmer and lighter build. A Tegra 3 chip powers the new tablet, which now comes pre-loaded with Android Ice Cream Sandwich. While all of that is good, what could have made the Sony offering even more appealing is its display. 1280 x 800 is quite dull in comparison to 1920 x 1200 pixels, which is fast becoming the standard for Android tablets.

Also, the one thing that may not play favorably for the tablet’s prospects is its price. A starting price of $399 could have been considered affordable a year or two ago, but not anymore. More so since Asus has its Transformer Pad 300 device available at just a shade more than $400 but with twice the internal storage. Other enticing options in this segment include the Acer A700, which is a device comparable to the Xperia Tablet S but with twice the storage capacity, a HD display, and priced at $449. The same goes for the Asus Transformer Pad Infinity TF700 as well, which also sports a faster processor and a 1920 x 1200 pixel display, while still being priced the same as the 32 GB Xperia Tablet S.