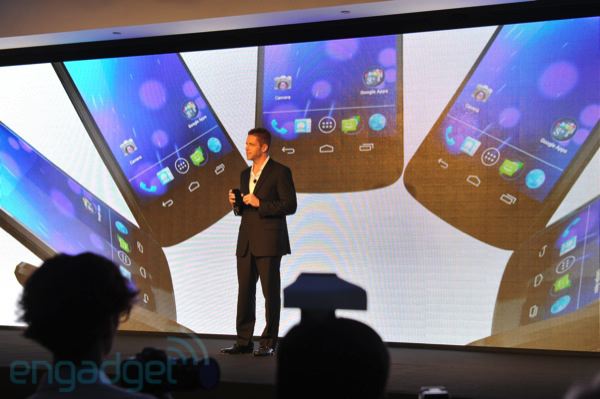 The newest Samsung smartphone, the cloud-based Galaxy Nexus, was unveiled this evening at a webcast press conference. Engadget’s Tim Stevens‘ live-blog of the launch, complete with photos of the speakers and the devices themselves, as both the LTE and the HSPA+ were released at the event. While various leaders from both Samsung and Google were on hand to talk about the relationship with the new Icecream Sandwich Android phone, the nuts and bolts of the device came a little later.

The obvious opening discussion from Samsung Senior Vice President Kevin Packingham centered around this phone being the fastest on the market, at everything. Video, web surfing, and streaming are all faster, thanks to a 1.2GHz processor. The screen, while still a 4.65” display, is wider and has a contrast ratio of 100,000:1, the highest available, but Samsung stands by their point that the phone won’t actually feel any bigger in the user’s hand.

“It’s hard to believe, but Android was born only three years ago. In that time it has been evolving in an amazingly fast and furious rate,” said Matias Duarte, Senior Director of Android User Experience at Google. “Meet Roboto. It’s a totally new typeface for Android — modern yet approachable. It was built from scratch for high-definition paper density displays…We wanted something relevant, emotional, and we looked to the latest trends in graphics design to inspire us. We took all of the actions that you do every day and brought them front and center.”

Some of those new user action features include app and widgets tabs that keep all of the favorite icons out of the way when not needed, and the ability to make folders on the right-to left sliding touch screens to store everything from icons to contact lists. Making and re-naming the folders is easier than ever.

The updates to the Nexus’s keyboard garnered a lot of attention at the event. Auto-correct features and word suggestions are included, as is voice-recognition messaging, including the ability to speak the punctuation marks and emoticons. This version also has FaceUnlock, which recognizes the user’s face to activate the phone.

The phone’s web browser allows for sixteen tabs to run at once, and swiping the tabs to the side allows the user to discard them. Web pages can be saved for offline use, a great feature for those areas of low connectivity. Of course, it’s not a Google-enhanced phone without Gmail, which has a redesigned inbox. One of the discussed features which drew appreciative looks for the conference attendees was the IceCream Sandwich Offline Search, which allows the user to set a time for the device to cache online items for later use. Of course, the ability to use a browser with that much ease means there needs to be built-in data usage tracking. The Nexus has that, as well as a prediction graph that shows the user how much he might use at this current rate over the course of the month, a great add-on for people who pay for data usage through their carriers.

Of course, the Nexus has the usual features like calendar functions and an installed camera, but the IceCream Sandwich upgrades to the phone’s camera make it one of the best that can be carried at all times. Obviously, the ability to instantly share photos is there, but so is real-time cropping and editing of photos. A panorama mode is also installed, meaning the user can scan a larger image area and incorporate it into one wide-screen photo. Of course the camera on the Nexus has a video mode, but this video feature can actually zoom while recording, much like an actual video camera.

While the device will launch in November in the U.S., who exactly will be the domestic cellular carrier wasn’t made clear, although some attendees speculated that it will be Verizon, although Verizon unveiled its 4G LTE Droid Razr earlier today.