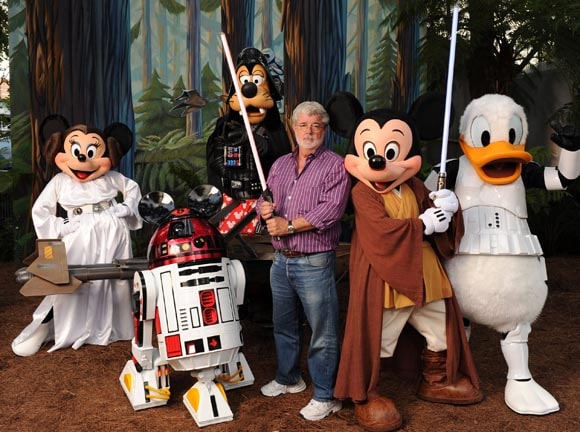 Disney made waves when it acquired Marvel last year and fans all over the world are going to be seeing even more superhero movies in the near future. Today the company has acquired LucasFilm for over 4.03 billion dollars. This gives Disney the full rights to Star Wars, Indiana Jones, Industrial Light and Magic, and Skywalker Sound.  Disney also confirmed that a new Star Wars will come out in 2015 and new movies will be released every two years after that!

“For the past 35 years, one of my greatest pleasures has been to see Star Wars passed from one generation to the next,” said George Lucas, Chairman and Chief Executive Officer of Lucasfilm. “It’s now time for me to pass Star Wars on to a new generation of filmmakers. I’ve always believed that Star Wars could live beyond me, and I thought it was important to set up the transition during my lifetime. I’m confident that with Lucasfilm under the leadership of Kathleen Kennedy, and having a new home within the Disney organization, Star Wars will certainly live on and flourish for many generations to come. Disney’s reach and experience give Lucasfilm the opportunity to blaze new trails in film, television, interactive media, theme parks, live entertainment, and consumer products.”

The deal is more or less all complete, but is subject to the whims of the Regulatory authorities, who must still approve the acquisition before it can close. Here is hoping for Disney remakes of Day of the Tentacle!