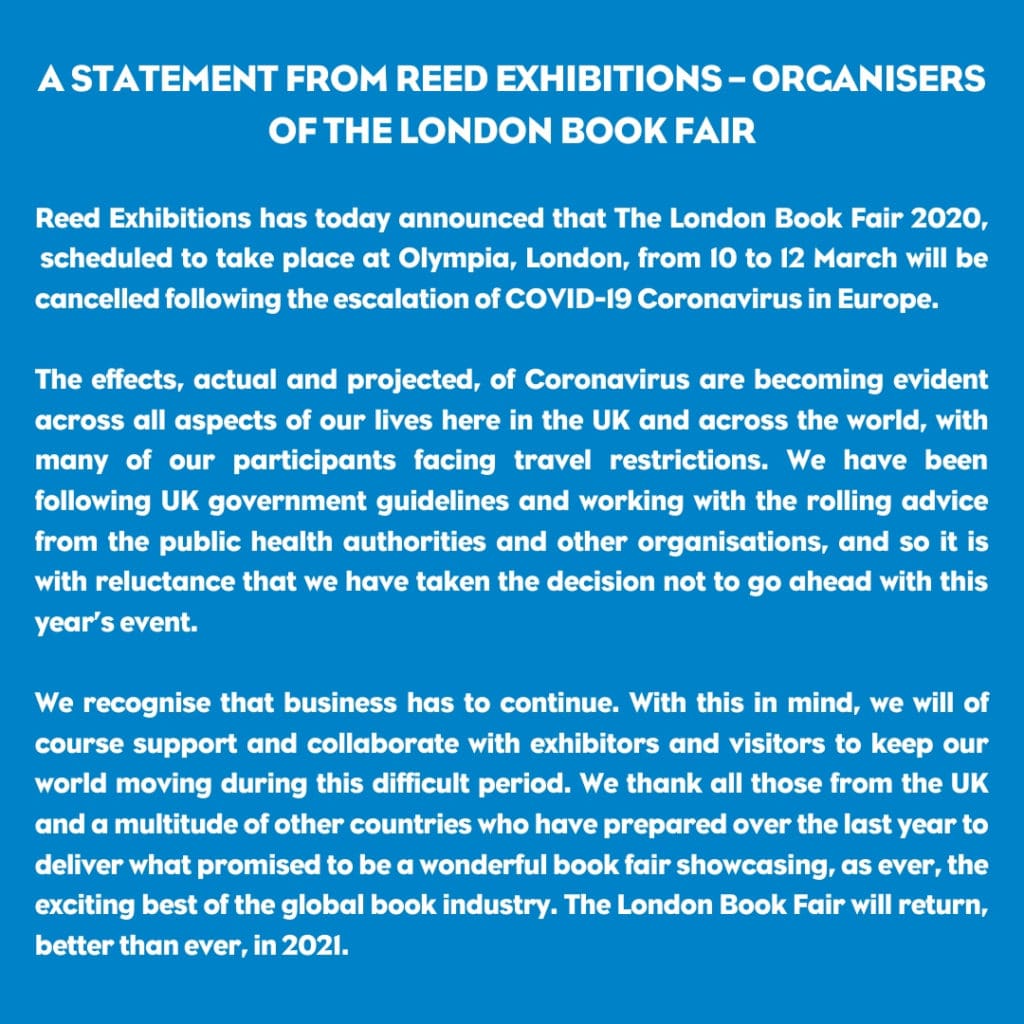 Every major publisher based in the United States, pulled out of the London Book Fair over the course of the past few weeks, but it looks like the organizers of the event decided to cancel it today. It simply could not happen without the support of the publishing industry and even authors who were going to sign autographs and pose for pictures pulled out too.

Just before the announcement that the London Book Fair was cancelled, HarperCollins UK and Simon and Schuster UK said they were withdrawing from the show.

Reed Exhibitions issued the following statement to Good e-Reader. “The effects, actual and projected, of coronavirus are becoming evident across all aspects of our lives here in the UK and across the world, with many of our participants facing travel restrictions.

“We have been following UK government guidelines and working with the rolling advice from the public health authorities and other organisations, and so it is with reluctance that we have taken the decision not to go ahead with this year’s event.

“We recognise that business has to continue. With this in mind, we will of course support and collaborate with exhibitors and visitors to keep our world moving during this difficult period. We thank all those from the UK and a multitude of other countries who have prepared over the last year to deliver what promised to be a wonderful book fair showcasing, as ever, the exciting best of the global book industry. The London Book Fair will return, better than ever, in 2021.”

The London Book Fair is quite different than Book Expo America, which happens in New York every year. It is basically considered a “rights fair,” where publishers bid on new titles by emerging authors or bid on translation or distribution all over Europe. There is also an author component,  where they pose for pictures and sign autographs at their publishers booth. Without publisher support, authors wouldn’t have anywhere to go to conduct meet and greets. The London Book Fair was basically doomed as soon as Amazon, Ingram, S&S, Hachette, Penguin Random House and others said they wouldn’t be setting up booths or attending the event.

It remains to be seen what will happen to all of the authors, books and distribution channels, whose rights were up for grabs, now that the London Book Fair is cancelled. There is always the Frankfurt Book Fair, which is the second most popular publishing event in Europe and it will occur in October. Until then, there is always Book Expo America.

The main culprit of the bookfair closing is the Coronavirus, much like Sars a decade prior, it seemed to wreck the most havoc during the winter, when people were indoors and it was cold outside. Many experts believe that once Spring and Summer occurs, the virus will cease to spread. The experts are unsure of why the viruses tend to stop the spreading in the spring and summer, it is likely because people are outside.