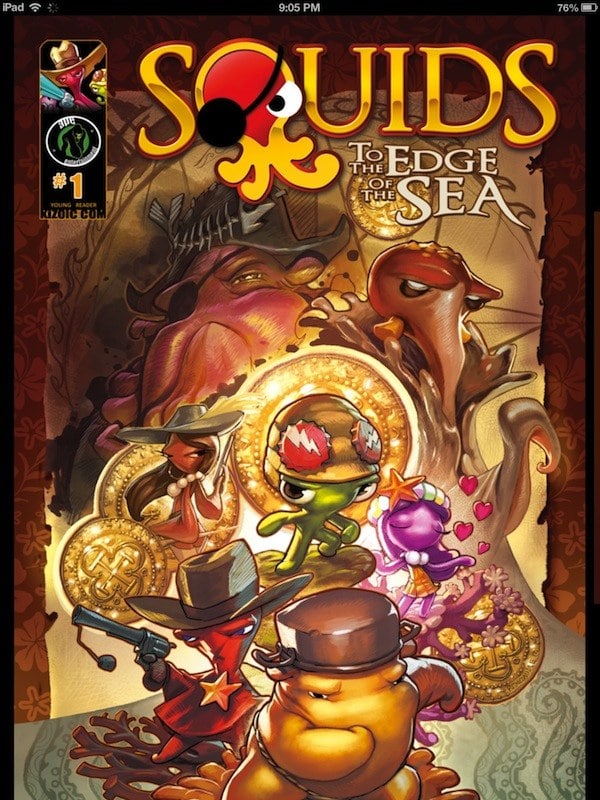 Squids is a tablet game in which the players flick and stretch little squids to attack enemies. Now it’s been adapted into a comic about where those squids come from and what sort of battles they are fighting. Although the Squids game is available for iOS and Android, the comic is strictly an iOS app.

The new comic is the work of Ape Entertainment, which has made quite a business out of game comics for iOS. The company’s first one, Pocket God, may be the best selling digital comic on tablets; it has been downloaded over 1 million times, and the vast majority of those downloads were paid.

Ape has a different approach to digital comics than most other publishers. Its game comics (which are only part of its line) live in the same ecosystem as the games they are based on: iOS and Android devices. Rather than setting up a free app and filling it with comics that are for sale, as comiXology and Comics Plus do, Ape makes each comic series a separate app and charges 99 cents for the app. That gets you the first comic, and more comics can be purchased in-app for 99 cents each (the Pocket God app also has bundles). Clearly, while comiXology and Comics Plus are designed for comics readers who are looking for a variety of new comics, the Ape apps are designed for gamers and other casual users who are very interested in one property.

Squids launches with a special deal: The app plus the first two comics for 99 cents. That’s not a bad deal. Each of the comics is 22 pages long, with just two pages of in-house ads. Those first two issues are pretty good, too, although I have a few quibbles. The comic is done in landscape format, which is great—artists Nicanor Pena and Ben Steeves do a nice job of filling up the screen with plenty of action and detail. The app and the comics open in portrait mode, though, which is a minor but noticeable glitch—it takes a minute to figure it out and adjust.

The other problem I have is with the beginning of the main storyline. Writers Jackson Lanzing and David Server quickly sketch in the backstory—the squids had to unite to fight the Black Torrent, and The Baron that controls it. Fine, fine. The squids prevail. “But along the way they lost one of their own,” the narration boxes tell us. Really? Who? Because there is no indication in this spread of who that character is or what he looks like. Some of the information gets filled in in the course of the comic, but then there’s another plot hole: Apparently the squids can get him back, but they need to figure out how. Perhaps if you play the game all this is clear, but these omissions make it hard to follow the comic at first.

After that wobbly beginning, though, the story settles down into a solid tale of a quest by a ragtag crew of squid. The characters are nicely defined, if a bit standard-issue—there’s the buffoonish older squid, the impetuous young squid, and the competent, knowledgeable cowboy squid. The art is really nice, the characters are well defined, the colors really pop, and the overall feel is of a lush fantasy world. 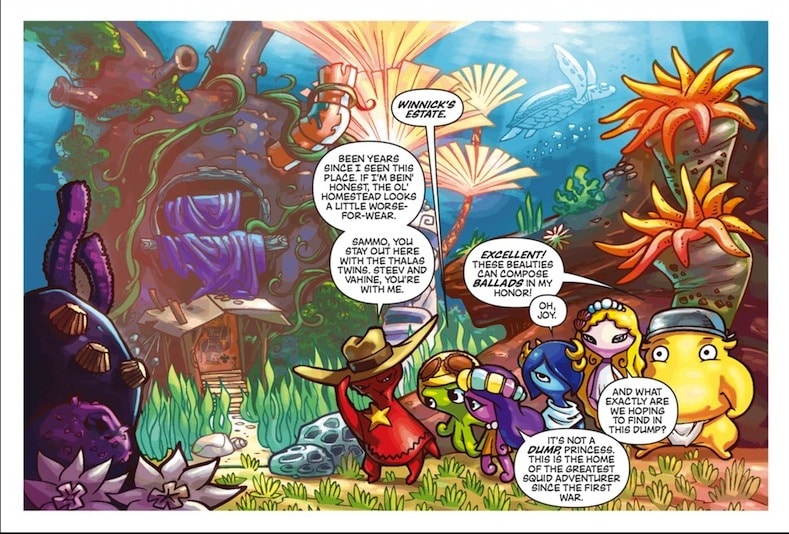 The second comic is divided into two parts. The first part continues the quest story, while the second is a standalone flashback. The second story is rather slight, but it serves to fill in the characters’ backgrounds and personalities a bit. Overall, Squids is a charming and engaging comic that will probably have more appeal to kids than grownups, and it delivers an entertaining pair of comics for a very reasonable price.

In addition to the comic app, the Squids game has a free update that includes a mini-comic about Clint and Sammo, the same two characters who star in the comic, which makes for a nice little crossover.