You are here: Home / Digital Comic News / Comic-Con is all about the digital comics 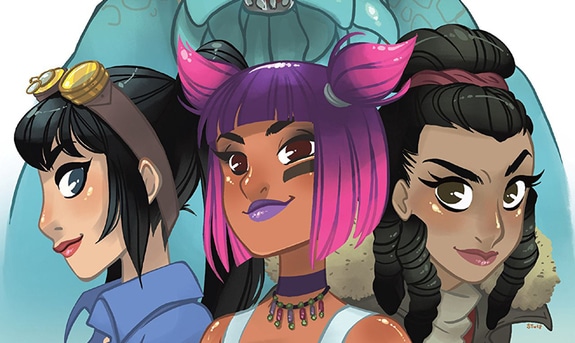 The San Diego Comic-con is currently going on and there have been a slew of announcements that will change the landscape over the next few years. Marvel and IDW have signed an agreement that will see IDW use famous properties be tailor made for kids and young teens. Comixology is hyping up new originals and DC is going to be launching a streaming service that will include thousands of comics that have been remastered for 4K screens.

Last week Marvel and IDW announced that the two companies will develop middle-grade comic books designed for younger readers. Featuring some of Marvel’s most popular characters, the monthly issues and trade paperback collections, published by IDW, will be available for sale at local comic book shops and book retailers across the country, expanding opportunities for the next generation of Super Heroes to experience the Marvel Universe. All of the digital editions will be able to be purchased via the IDW app for iOS and Android.

Launching in November 2018, the Marvel and IDW collaboration will kick off with a Spider-Man series featuring both Peter Parker and Miles Morales, followed by an Avengers series beginning in December and a Black Panther series in January 2019. Each of these titles will serve as an easily-accessible jumping-on point for younger readers to follow the adventures of their favorite characters.

ComiXology is starting to put a priority on original content as a driving force behind their Unlimited program and selling single issues/graphic novels. This is a similar strategy that Audible employs, original content is appealing, while being extremely profitable. Within the next few weeks they are launching Goliath Girls by writer Sam Humphries and artist Alti Firmansyah, Grave Danger by writer Tim Seeley and Mike Norton, Hit Reblog: Comics That Caught Fire by writer and artist Megan Kearney, along with over a dozen webcomics superstars and editor, Hope Nicholson, and Teenage Wasteland by writer Magdalene Visaggio and artist Jen Vaughn. Readers can dive in immediately: the books are free to read for members of Amazon Prime, Kindle Unlimited, and comiXology Unlimited and are also available for purchase on Kindle and comiXology.

Also unveiled at Comic-Con International were future comiXology Original titles to be released in the coming months including: The Dark by writer Mark Sable and artist Kristian Donaldson, Delver by co-writers C. Spike Trotman and MK Reed with art by Tish Doolin, and The Stone King by writer Kel McDonald and artist Tyler Crook.

This fall DC Unlimited is launching, which will try and compete against Netflix, Amazon Prime, Hulu and the upcoming Disney service. One of the big draws aside from the original content will be DC comics. There will be over 3,000 comic available at launch and there is no word if DC is going to shutter their existing DC Comic Reader.

DC has remastered their backlist catalog for 4K resolution and developed its own native comic reader that has been optimized for every platform the service will be available on at launch including iOS, Android, Roku, Apple TV, Amazon Fire TV, and Android TV, as well as the web and mobile web – which will allow each comic to be presented in whatever format best fits the screen it’s being viewed on.

Kohei Horikoshi, creator of the bestselling My Hero Academia series is celebrating the success of the The Adventure Zone: Here There be Gerblins, which is the top selling graphic novel on Amazon with 99,000 copies in print. Fantagraphics is relaunching The Comics Journal as a print publication in January 2019, after ending print publication in 2013 and turning it into an online publication.