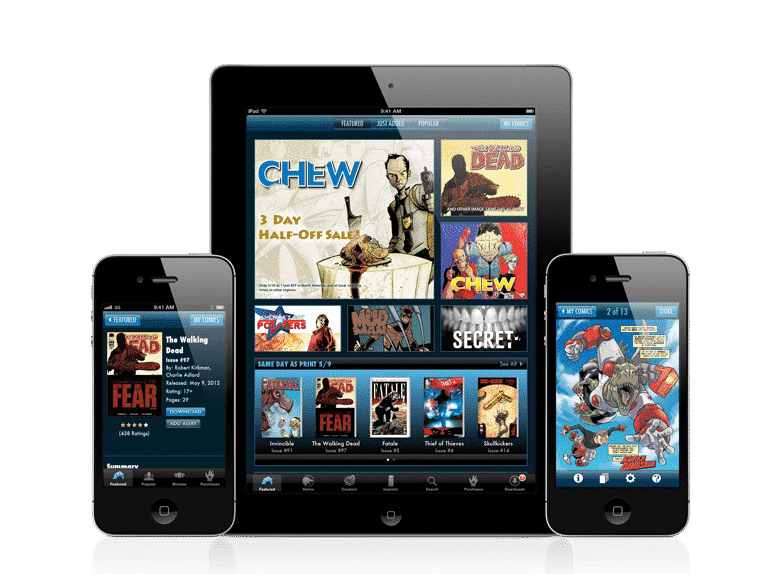 Crains New York broke the news this week, in a profile of comiXology and its CEO David Steinberger, that the company has now passed the 200 million download mark. It was just about a year ago that they were at 100 million downloads, so that means they have downloaded 100 million comics in the past year or, if you do a bit of rounding, roughly 2 million comics per week. Now, those aren’t all comics sales—some of them are free downloads—but I’d guess that comiXology probably has a higher paid-to-free ratio than most digital comics distributors because they have managed to corner the market on comics-shop comics. As the Crains article points out, they have an exclusive on Marvel single-issue comics, so if you want this week’s issue of Amazing Spider-Man, and you want it digitally, you have to get it from comiXology. Several other publishers have signed exclusives with comiXology over the years, but that’s probably the most important one, given their customer base. (DC comics are also available on comiXology but they don’t have an exclusive contract).

Two million downloads a month is a pretty impressive number, but it’s still far fewer than the number of print comics sold each month. Here’s another interesting statistic from that article: Image Comics expects to sell 300,000 print copies of The Walking Dead #115, which is their tenth-anniversary issue, and about 45,000 digital copies. That puts digital at 15%, which is a ratio that has seemed to hold true for about the past year. The Walking Dead is a phenomenally popular comic, but it’s also one you would expect to do a bit better in digital than in print, because the television show has a much larger audience than the comic, and most people who don’t read comics regularly don’t even know that comic shops exist, much less how to find one. Search on “The Walking Dead” in the iTunes store, though, and comiXology’s Walking Dead app shows up as one of the first results. So one would expect a lot of new readers to be coming to it through the TV show.

At any rate, the article mentions Kindle as competition for comiXology, but the Kindle folks haven’t sent out any press releases bragging about the number of comics they have downloaded, so we can assume it’s not too impressive just yet.