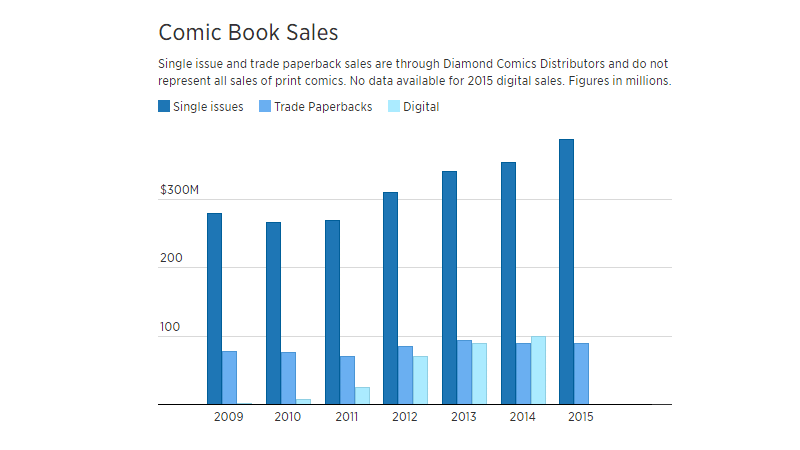 When e-books first started getting popular in 2009, the traditional book selling industry started to experience declines. Over the course of the next few years bookstores started to go out of business and many people thought print would die completely in the near future. Comics on the other hand have been immune to the disruption of digital.

A new study by CNBC tracked the sales of physical and digital comic books over the last few years. It is apparent that tangible and digital are on the rise. On top of that, the growing popularity of digital books, especially in the years since the launch of Comixology, has done nothing to halt the sales of physical single issues—in fact, for the last five years sales of single issues rose consecutively every year.

Customers have a lot of choices when it comes to reading digital comics and graphic novels. You can buy single issues from Amazon, Barnes and Noble or Kobo or subscribe to Marvel Unlimited and Comixology Unlimited.

I think one of the big reasons why digital has not cannibalized print is that there are only two major publishers; DC and Marvel. They can easily adapt to a changing landscape and develop their own infrastructure to sell comics directly or take risks on new verticals.