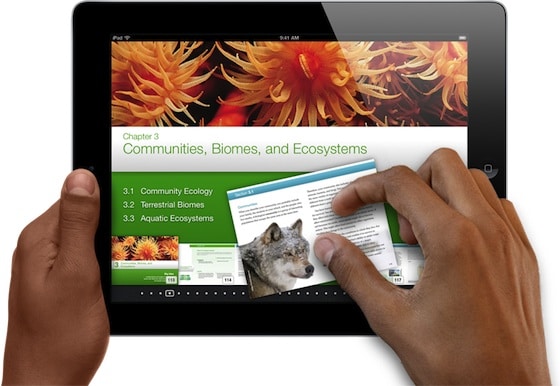 We’re closing in on nearly a decade since ebooks first moved away from being a niche technology novelty and became a household object. In those early years of the current phase of this digital publishing revolution, ebooks were being hailed as the new frontier of educational publishing. While multiple surveys discovered that kids didn’t like reading ebooks for fun, they had no problem consuming them when it came to required school textbooks.

Digital textbooks and the curricular bells-and-whistles that enhanced ebooks could provide were supposed to completely replace the old, expensive dead trees editions. Unfortunately, there were a lot of obstacles in the way. As it turns out, the expense of a textbook has less to do with the paper and ink and a lot to do with the gaggle of PhDs who wrote it. Schools at every level were quick to reject digital textbooks because they felt like they’d lost control over what materials were used in the classroom, as though letting students use an ebook on a tablet would become a free-for-all of homemade, unvetted resources. Finally, with the price of the digital edition still nearing that of the print edition, college students weren’t too happy to ignore the budget benefits of used and resale textbook options.

Now, though, we may once again be making some headway in the adoption of digital textbooks. According to the Orlando Sentinel, students who are shouldering the burden of expensive print editions might soon have some relief.

“The Florida Board of Governors, which oversees the university system, approved a 2018-19 budget request last week that includes a $656,000 program to encourage the greater use of so-called ‘eTexts’ and other open educational resources instead of standard textbooks.”

But will the students make the switch? There’s something to be said for not just the savings, but also the ability to buy used (and therefore, annotated) print editions. The university system thinks so, and other states have demonstrated the willingness to change formats.

“In a survey of 22,000 students at Florida’s 12 universities and 28 state colleges, the Florida Virtual Campus reported 53 percent of the students spent more than $300 in the spring 2016 semester on textbooks, with about 18 percent reporting they spent more than $500.”

Indiana has been credited with some of the most widespread digital adoption, amounting to a more than $3 million student savings in one academic year alone. It remains to be seen, of course, how students take to ebooks when they do have options like used, rentals, and professor-created materials, but at this point, there’s no reason not to try.