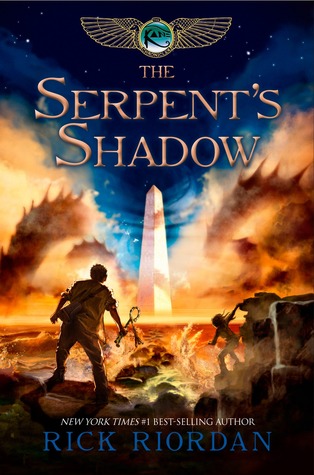 I really wish Rick Riordan had been my history teacher. I would have paid a lot more attention to the side plots and back story of so many of the well-known stories from ancient civilizations if my teachers had made history as exciting as Riordan does. The author who introduced middle grade and young adult readers to the Percy Jackson adventures through Greek mythology has continued his masterful storytelling with Carter and Sadie Kane’s experience through Egyptian mythology. Of course, the author takes a lot of liberty with the Egyptian stories, but that’s what makes it fiction and what makes it fun.

Once again, Carter and Sadie must save the world from the forces of darkness while taking a few risks along the way. As the young leaders of the Brooklyn House, a home for magician initiates, the Kanes are still fighting evil but this time, the attacks are also coming from their own. Rebel magicians who make a few good points about how the world has kind of fallen apart no thanks to Carter and Sadie are calling for the deaths of the two younger Kanes and demanding that their uncle step down as Chief Lector.

Interestingly, a trend has started with middle grade stories, one that I first noticed with the Harry Potter books several years ago: there is a lack of sugar-coating when it comes to danger and death. Readers who think the adventures of this brother-sister duo might resemble Jack and Annie from May Pope Osborne’s Magic Treehouse series will be very disappointed the first time Carter kills someone. While the language level and usage is age-appropriate, the violence and thematic elements are very decidedly for more mature readers.

If I had to complain at all about The Serpent’s Shadow, it’s that it could have ended about twenty pages sooner than it actually did. There was such a roller coaster ride of action and resolution throughout the book that when the story did finally resolve itself with some sort of a happy ending/cliffhanger, it seemed to drag just a little bit.

Overall, it was a great read. Fans of Riordan’s will not be disappointed in the action or the historical tie-in.