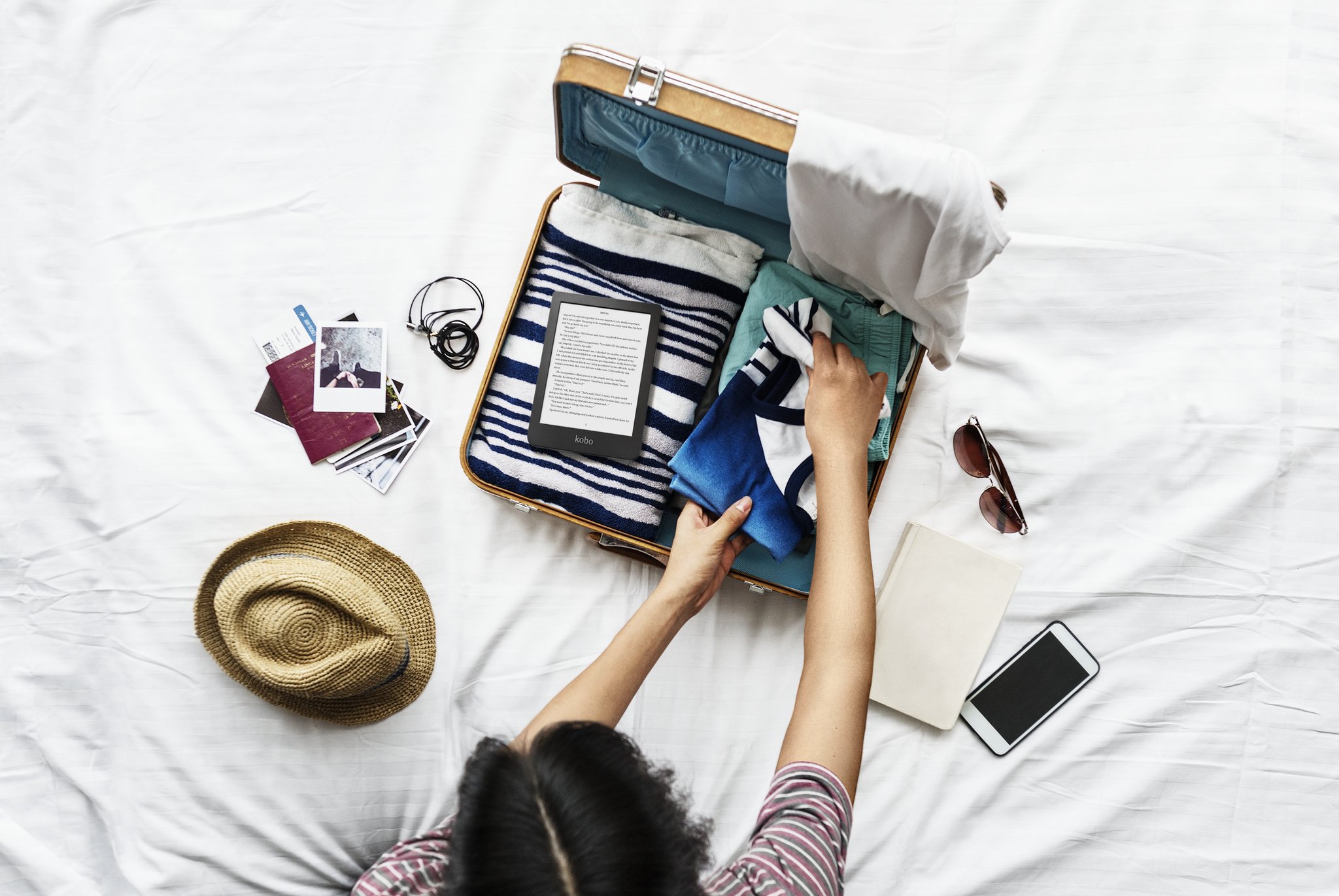 The vast majority of major publishers in North America use very intrusive DRM by Adobe that prevents users from easily backing up their online purchases and prevents them from loading them on many smartphones and e-readers. If you purchase a Kindle book, it is impossible to transfer it to the Nook or Kobo, due to the incompatibility of DRM. Social DRM has been around for a number of years and is growing in popularity in Europe. This technology employs digital watermarks and makes it easy to sideload the ebooks on all of your devices and if the book appears on a pirate site, it is easily tracked down to the user who initially bought it. Is there a future in social DRM?

Digital watermarking is a term that first appeared in the mid-1990s. The term “watermarking” is meant as an analogy to a watermark in paper: a hidden mark that only becomes visible when the paper is subjected to a special detection process, such as immersion in certain liquids. Watermarks were originally meant to convey the identity of the paper manufacturer or vouch for the authenticity of documents such as postage stamps, paper currency, passports, and other government documents.

Analogously, digital watermarking involves embedding information – called a payload – in digital files that indicates the identity of the content or its owner; and as we’ll see, watermarks can also be used to embed other information such as the identities of e-book retailers and users who purchase e-books. Unlike paper watermarks, digital watermarks may or may not be hidden (imperceptible to users); nevertheless, academics and technologists often categorize watermarking as a type of steganography or “hidden writing.”

Digital watermarks were first applied to audio and visual information. The original schemes were algorithms for embedding data into digital files in ways that were imperceptible to humans. Watermarking algorithms for those types of content typically start by analyzing the content to determine areas of the content, such as portions of an image, where embedding data is least likely to change the user’s perception of it. Then they apply an embedding algorithm to those areas.

E-book watermarking works somewhat differently. Because e-book file formats such as EPUB and PDF are based on text characters, it’s not possible to apply an algorithm to alter the text itself so that the changes are imperceptible; the text of the e-book must remain as the author and publisher intended.

Instead, e-book watermarking algorithms affect aspects other than the text itself. There are three general ways to insert payloads into e-books: 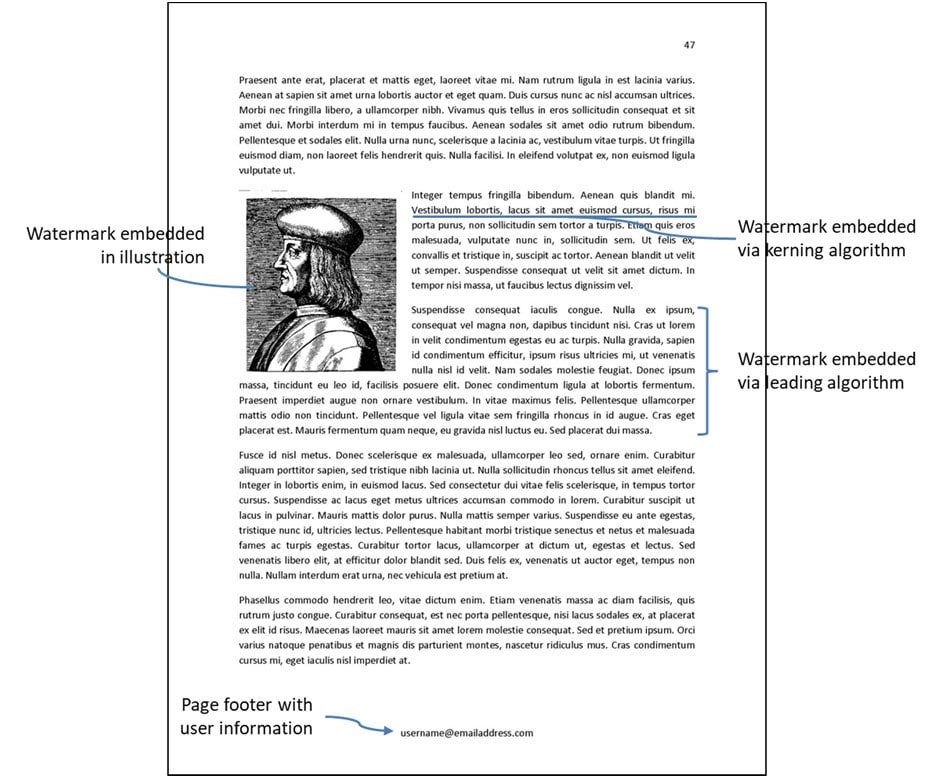 The most common application of watermarking for e-books is in reducing unauthorized distribution such as piracy. E-book watermarking is sometimes known as “social DRM” or “soft DRM” because it can serve as a deterrent to distribution beyond a user’s close associates; the user may not be comfortable sharing a document with a user identifier in it. These terms are used in the industry even though watermarking is not DRM, as we will discuss below.

For example, an email address at the bottom of every page (the technique O’Reilly and Springer use) serves as a constant reminder not to “overshare” the e-book, while their value in forensically tracing the time and device of purchase is limited. On the other hand, the single obfuscated (yet visible) transaction identifiers embedded in Pottermore Harry Potter e-books are more for forensic use in piracy detection than as “social DRM” reminders to users.

A copyright monitoring service can use the watermarking vendor’s tools to extract watermark payloads and report them back to the publisher. This can complement other anti-piracy techniques that these services use, such as:

Watermarking is often confused with Digital Rights Management (DRM). DRM is a technique that involves encrypting files and requiring special software/hardware and credentials, such as user or device IDs and encryption keys, to view the content. Many major e-book retailers, such as Amazon, Apple, and Kobo, use their own DRM technologies, which are not interoperable with one another.

DRM has become well-known over the past two decades because of its controversial nature; there has been much press coverage of DRM, including in mainstream media, whereas coverage of watermarking is practically nonexistent and limited to industry trade and academic publications.

The fact that DRM is a widely-recognized term has led some writers to use it in describing watermarking; in fact the term “social DRM” was originally used – by Bill McCoy, then the head of Adobe’s e-book software business – in 2007 to describe an alternative to DRM that involved inserting the user’s name in e-books.

Nevertheless, watermarking is not DRM; the technologies are fundamentally distinct. The biggest practical difference between watermarking and DRM is that DRM-protected files can only be viewed on devices or apps intended for it (e.g., Amazon Kindle e-books on Amazon Kindle devices and apps), whereas watermarked e-books can be read on any device or app that renders the format (e.g., any e-reader device or app that reads EPUB).

In fact, interoperability is one reason why most retailers (not affiliated with publishers) are reluctant to support watermarking as an alternative to DRM: DRM enables retailer “lockin,” while watermarking does not.

Otherwise, here are some of the practical differences between watermarking and DRM for e-books:

What companies are responsible for social DRM?

Digimarc is one of the industry leaders in making readers lives simpler and has signed up a number of big name clients over the years. Digimarc has been at the forefront of digital watermarking technology for almost two decades. After the acquisition in late 2012 of what is now the Digimarc Guardian platform, the leading anti-piracy solution for the publishing industry, we turned our focus to developing a service for watermarking e-books.

A few years ago HarperCollins Publishers, one of the largest publishers of consumer books in the world, and LibreDigital, a leading provider of e-book distribution and fulfillment services, signed on as partners.

BooXtream is a cloud based service to watermark and personalize EPUB e-books. In 2010 BooXtream was the first dedicated API based watermarking and personalization web service for EPUB e-books. The BooXtream web service provides an advanced watermarking engine, a master e-book repository, and a download link fulfilment module. The API has been specifically designed for an easy e-commerce integration. The web based BooXtream Dashboard offers management and reporting tools as well as a manual mode to watermark single e-book (review) copies.

BooXtream has a worldwide customer base and was winner of the International Book Industry Technology Supplier Award at the London Book Fair International Excellence Awards 2015. BooXtream is created by Icontact, a Netherlands-based software company specialized in solutions for the publishing and library industry.

Watermarking for e-books has existed since at least the early 2000s, but it hasn’t gotten anywhere near the attention that DRM has. Yet it is a complement and worthwhile alternative to DRM as well as other techniques for curbing piracy.

Despite its lack of publicity, e-book watermarking is becoming more and more widely used – especially in Europe. Here are some indications of watermarking increasing popularity in European markets:

Watermarking is versatile: it gives publishers and retailers control over the level of personal information they can embed in e-book files, and it offers opportunities for adding value to e-books through personalization. It is time for the publishing industry to recognize the importance and potential of e-book watermarking. Every book publisher should consider adopting watermarking and advocating its use throughout the e-book publishing value chain.