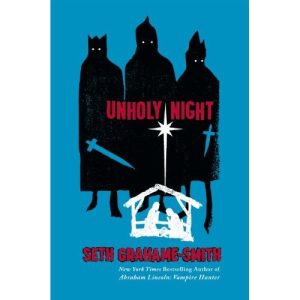 Verdict: An artfully done yet completely plausible—albeit fictional—look at the history that was never told behind the birth of Jesus Christ.

When we think of revisionist history, we often think of futile attempts to paint the villains in a better light or downplay some of time’s atrocities. But the author’s first attempt at rewriting history in Abraham Lincoln: Vampire Hunter, which takes a fictional look at Lincoln’s motives in the Civil War, was more comical than disrespectful.

But Unholy Night is dangerous ground. You simply do not impart your own theories and characterizations into a story so well-known and zealously protected. I believe that only this author could have done it so well.

In the eternal scope of asking the question, “What if?” this book offers a different view point on the events surrounding the birth of the Christian Messiah. What if the famed-yet-often-misunderstood Wise Men had been nothing more than petty thieves disguising themselves as noblemen in their effort to escape Herod’s executioner? With heart-breaking back story on many of the key players, such as lead thief Balthazar’s downfall at the age of twelve after watching a Roman centurion skewer his baby brother in the market, Graham-Smith is able to humanize so many of the characters that have until now only been known as untouchable and godly.

As a Christian, I kept nervously waiting for this book to slide into the realm of blasphemy, but it didn’t.  In fact, the only point I took issue with is the minor calculation error that John the Baptist was six years older than Jesus, whereas Scripture states their mothers were pregnant at the same time. The book also didn’t present any real argument for Christianity as being the universal truth. It was simply an amazingly crafted work of fiction about several people that I thought I knew.

Perhaps the most eye-opening was the scene in which Joseph, the accidental earthly father of God, is trying to explain to the cynical would-be wise man how he could possibly believe his young bride’s story of divine impregnation. We are treated to the words of an all-too-human man who admits that, at least at first, he didn’t believe her either. The words on the page could have been spoken by any doubting man throughout history, but ultimately it is his faith the made him act according to plan.

Overall, Unholy Night is an accommodating read for any fan of history, religious or otherwise. It is a page-turner from the beginning whose actions are a surprise until the last word.