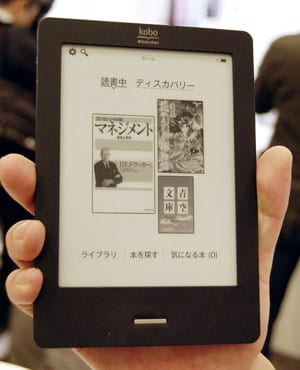 The Kobo Touch e-Reader went on sale on July 19th in Japan and it seems as though over 100,000 e-readers have been sold. There are over 26,000 eBooks currently available to be purchased and downloaded for free.  However Rakuten promised that the store would have 30,000 by the end of July, 60,000 by late August, and 200,000 by the end of the year. It does not look like they are on-track to meet their eBook goals, but at least the units are selling.

When the Kobo Touch went on sale Amazon had announced that their Kindle e-Reader would be hitting Japan later this year. There are certainly no particulars with the launch dates but the absence of books points to publishers being fragmented on what ecosystem to get behind. The reason that the number of e-books available is not increasing as planned is possibly because some publishers do not yet provide many books in digital form. Basically, many publishers are waiting to see if it is worth riding on Rakuten’s Kobo bandwagon or not.

It remains to be seen if dedicated e-Reader sales will catch on in Japan. Kobo has the advantage of supporting vertical text and displaying all of the characters necessary to get the best experience while reading. Even though Japan had the world’s largest e-book market until last year, it was mainly built on regular mobile phones and tablets. It’s still unknown whether traditional books on a dedicated e-reader will become a popular reading experience in Japan or not.