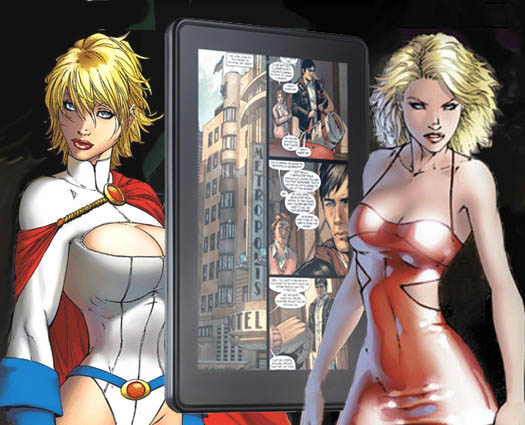 A lot of headway has been made in the past year in the realm of digital comics and digital graphic novels, for both the authors and the readers. With the advent of a wide variety of full-color capable tablet PCs, comics fans have asked for—and received—the ability to their favorite works electronically.

One of the first moves this year came out of DC Comics, whose New 52 relaunch in September included the digital day-and-date feature. This new model for comics publication meant that fans could purchase and download a new title on the same day that the print edition became available in stores. While critics argued at the time that this might not be a lucrative move, DC’s sales since September have shown otherwise and even the book sellers are reporting that many readers sample the digital version of the title and then still opt to come into the store to buy the print edition.

Now, Amazon is launching a comics storefront dedicated to DC Comics on its highly successful online retail space. Earlier this year, Amazon and DC angered some rival retailers when DC agreed to include 100 titles exclusively on the new Kindle Fire tablet, causing Barnes&Noble to pull the physical editions of those titles from its stores; Books-A-Million soon joined in the fight, considering it sells the Nook devices in its physical stores.

One of the upcoming features within this new storefront will allow consumers to purchase titles and read them across various Amazon-supported devices. Currently, a consumer cannot purchase the comic or graphic novel on the iPad Kindle app, then read a Kindle Fire version of the title on that app. That capability is hopefully coming soon.