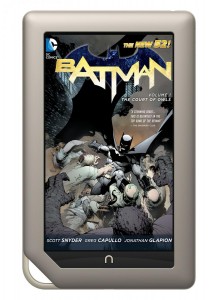 There was a time when the Kindle Fire had an exclusive relationship with DC Comics and Marvel ones where available on the Nook Color and Tablet. Barnes and Noble has just signed an agreement with DC Comics to provide 100 titles to the B&N online store.

With the addition of DC Entertainment content, Barnes & Noble is also introducing Zoom View, an all-new NOOK Comics feature designed for NOOK Tablet and NOOK Color. Zoom View allows readers to focus in on individual panels in graphic novels and comics, allowing them to fully enjoy the stunning artwork and compelling storytelling that brings this genre to life. Zoom View will be immediately available on all DC Entertainment titles.