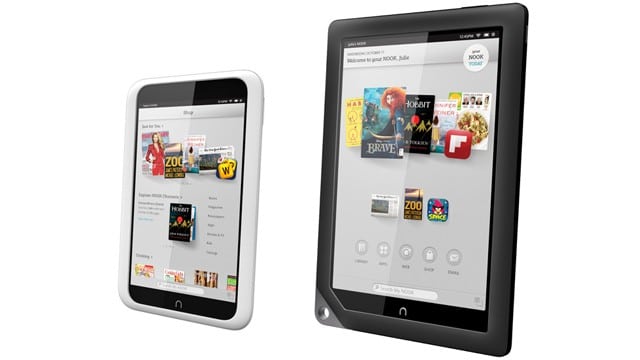 The Barnes and Noble Nook Tablet HD and HD+ demand is at an all time high. Pre-Orders in the USA have surpassed prior records for their line of devices by over 240% The company is only offering their new line of e-Readers in the USA and UK. International users have the ability to now order them via Shop e-Readers!

The Nook Tablet HD is a seven inch high-resolution display and will have a mighty resolution of 1440 x 900 pixels and 243 pixels per inch.Video playback will allow you to watch videos in 720p. The pixels are really punched into this model, 25 percent more per square inch than the Kindle Fire HD. Underneath the hood will be a 1.3GHz high-speed processor and 1GB of RAM.

The new NOOK HD+ will feature a 9-inch display with resolution of 1920 x 1280 and 256 pixels per inch for up to 1080p for movies, magazines, and more. The fully laminated display reduces glare and provides excellent viewing angles, perfect for personal or shared viewing. This amazing display rivals the new Apple iPad, but is 20%  lighter and nearly half the price. Underneath the hood is a 1.5GHz dual-core processor with 1GB of RAM. It will also have a mini HDMI port that will allow you to stream media directly to your television.

Both of these tablets will work for international users and give you access to games, apps, books, kids content and comics. Barnes and Noble is unleashing a new video service that is similar to Amazon Instant Video, so you can now watch movies in high-def on your Nook Tabs.

Whether you live in Canada, Europe, Australia or Mexico, you now have the ability to buy these new devices. Shop e-Readers has been in business since 2009, when e-Readers were still very fringe. The company now sells over 24,000 e-Readers a year to customers and Universities, becoming the world leader in e-Reader sales and support. Each device ships with 100 free eBooks and a DVD Video Tutorial that teaches you how to use the device.