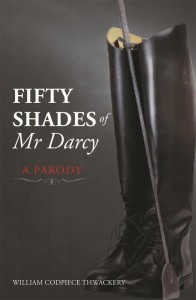 Most of us love a good parody as much as the next person, but when the parody is making fun of two mainstays of popular reading at the same time the result is just fictional gold. Fifty Shade of Mr. Darcy (Pocket Star) manages to take on the recent widely popular erotica title and the work of Jane Austen in one tongue-in-cheek swoop.

Unfortunately, parodies still have to bring something original to the page, and both Fifty Shades and Pride & Prejudice have been taken on in so many different ways that it’s possible to ask if there is anything new to be done. While the humor level in this book is a little basic, there are still the occasional surprises in wit and pun.

What the book does lack, though, is any level of explanation for why we’re reading it. Even with the advent of the “monsterized” classics such as Pride & Prejudice & Zombies, the interest was held for the reader with the bizarre nature of a plot that somehow managed to maintain the dire search for suitable husbands while requiring the Bennet sisters to kill hordes of undead invaders, but with this rendition, there really is no clear reason for the book to exist except to see how many penis jokes can be forced per page.

Still, it is a very light-hearted look at both the classics and erotica, and many readers may find it to be an amusing afternoon’s read.

Fifty Shades of Mr. Darcy is available for preorder from Amazon, Barnes and Noble, and other retailers.