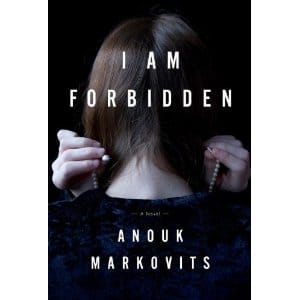 Spanning several generations and evolving over the course of some of the worst times in recent history for the Jewish people, I Am Forbidden (Hogarth) is Markovits’ haunting account of what happens to a people who are so at odds with both the world and their own spirituality. One of the constant underlying threads in the book was the desperate need the characters feel to adhere to a lengthy and demanding list of rules spelled out in their religious doctrine to the point that the tenets of their faith interfere with their ability to live.

The lives of the various characters, like the daughter adopted out of Romania who saw her parents shot by soldiers before her as they tried to flee the Nazis or the young survivor of a raid on a Jewish home who was only saved when the housekeeper took him in and raised him as a Christian, are so interwoven with the struggle to remain true to their Hasidic beliefs while living in a world that is trying to move forward following the Holocaust.

One aspect of Markovits’ book that is so compelling is it dispels the often-held notion that women in some of these cultures are unhappy and oppressed. While one of the characters, Atara, does have ambitions beyond simply marrying well and raising a family, the other women in this book are active and eager participants in their faith, however domineering it may seem to unknowing outsiders. The author very genuinely demonstrates that the readers’ perceptions of religious freedom are not necessarily the same for the characters.

While a novel set in the midst of a community of Hasidic Jews may not appeal to a sense of intrigue or adventure, rest assured that this novel is rife with the same flaws in human nature that provide good fodder for a suspenseful story. Deception, cruelty, extramarital affairs, and stalwartly immovable personalities are all part of these characters’ lives, regardless of their faith.