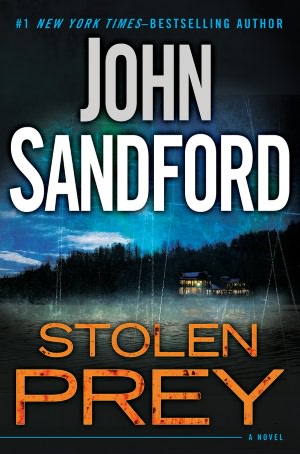 The NYT bestselling author of Storm Prey and Buried Prey is back with a book so suspenseful that I literally read it through squinted eyes, not sure of what I would find as I turned the page. What I found, though, was a work that carried our perceptions of what we think we know about our comfortable lives to a whole new realm of dysreality.

Lucas Davenport is simultaneously working an investigation into his Minnesota town’s most gruesome killings to date, while on the hunt for the serial petty thieves who beat him and robbed him at gunpoint. While it appears that the thieves were just a couple of desperately strung out meth abusers and the brutal murders were the work of meticulous Mexican drug cartel members intent on sending a message, even those firm beliefs will be called into question before it’s over.

An interesting sociological take on this book is the modern-day confusion so many people feel about the scenarios it presents. Was the computer software CEO really embezzling money from the drug cartel that used his company as a front for money laundering like the police initially suspect? Is our trust in computers misplaced, since it sets up a situation that allows the bank employees with the technological know-how to quietly pinch a few pennies here and there to the tune of $20 million?

Spoiler Alert: I guess it’s not like books come with a banner that reads, “Warning: Children get raped and murdered in this book,” but at times the violence and its descriptions were a little too gratuitous for my tastes. However, I don’t feel like it was too over the top for a different audience of crime novel fans. The other reason for the loss of a star was the almost-forced feeling of blatant product placement; by page sixteen, there were no less than five out-of-place brand name mentions, so much that I wondered if the author was being paid to mention specific shoe or clothing brands.

This was my first introduction into Sandford’s body of work and despite the grisly nature of his genre, I would certainly give his other books a read. To find Stolen Prey for Kindle click HERE, for Nook click HERE.